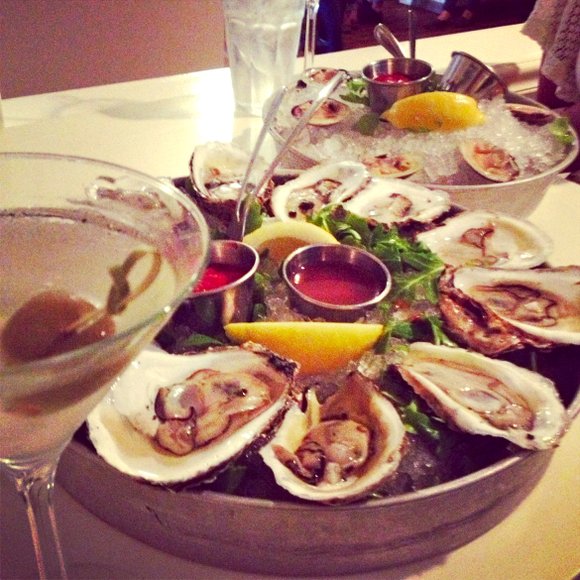 Oysters and martinis at Hooked.

I hope everyone enjoyed the Labor Day weekend and got a moment to themselves to reflect on the summer and prepare for September, fall and the holiday-laden fourth quarter of the year. The time just seems to fly by, but not so quick that I can’t savor summer 2013.

Last I left you, Martha’s Vineyard was doing it to me—friends, family, food, fun. The only thing missing was … competition? Yes, last year I only heard about the first ever Grits Cook Off, and the winning dish with sautéed mushrooms. This year, as a chef and food writer, I was asked, then goaded, then challenged to compete by the host and reigning champion. I took it …

My host family and I arrived at the location after having shopped for battle. There was a full-on brunch happening, with everything from delicious deviled eggs to a battery of grilled meats. My opponent Jeff’s dish, a grits casserole with sausage, egg and cheese, was already in the oven baking (yes, baking grits). I was behind the gun. My sous chef Katrina and I jumped into action. My dish of poblano pepper, corn and Vermont white cheddar grits with applewood smoked bacon and scallion gremolata received high praise. The competition was close, but ultimately, the champion prevailed with his more familiar flavor combination. Look out next year, Jeff!

The second part of my time in Martha’s Vineyard was spent with family, but not before I had a morning breakfast stolen-moment-alone at Biscuits (Oak Bluffs), the only Black-owned restaurant on the island. Owner Christopher Acrudi serves up a fluffy biscuit and a mean sausage gravy seasoned with rosemary and black pepper and whatever else is in their special blend of sausage. I do love a biscuit!

The day was spent on State Beach laughing, eating, entertaining friends that happened by … and talking to Gayle King?! Yes! It ended with buck-a-shuck oysters and dirty martinis with my cousin Quinn at Hooked before returning home to shower and head out to try contestant No. 1 in Battle: Lobster Roll.

We descended on Offshore Ale Co. (Oak Bluffs), as more than one person told me this was the place for the quintessential lobster roll. It was epic! It looked like there was a full 1.5-pound lobster in that piece. With the awesome house-made chips, we got it down!

Normally, Sunday is a day of rest, right? Not in Martha’s Vineyard when your aunt is planning a large housewarming dinner party. We were up early to run errands and prep. We hopped in the truck, and off we went to a beautiful plant and flower nursery to pick up an arrangement, then to the butcher, the baker (no candlestick maker), the fish monger, the grocery store and to my new favorite farm and gourmet food store on the island, Fiddlehead Farm (@fiddleheadmv, West Tisbury). Bob, the owner, made the most gorgeous platter of cheeses and charcuterie with preserves, champagne grapes and raisins dried on the stem. Really stunning!