Liberty limp to the finish line 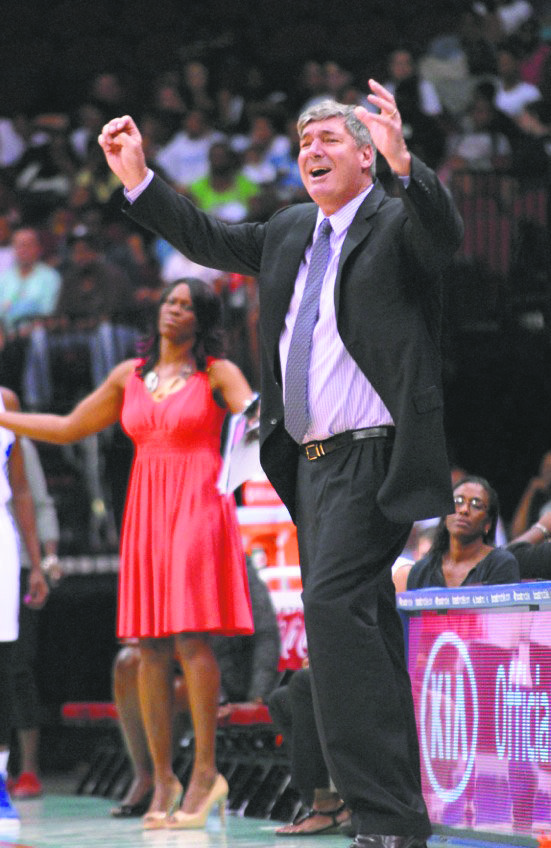 Bill Laimbeer, the Liberty coach with a young and struggling team, shows his frustration. Photo by Bill Moore

The New York Liberty have played their final game at the Prudential Center in Newark. Hopefully, their return to Madison Square Garden in 2014 will shake the team out of the doldrums that beset them this year.

“It just wasn’t our night offensively, but I think we also didn’t play as hard as we should have, especially fighting for our lives to get into the playoffs,” said Liberty point guard Leilani Mitchell after Friday night’s loss to the Atlanta Sky, the Liberty’s fourth consecutive loss.

Mitchell, 28, has played with the Liberty since 2008, starting at the point through most of the 2010-12 seasons. She’s seen them at their best, including 2010, when they amassed their most-ever wins in a regular season, and their worst, a dismal 2009 when the team played as if in a daze.

“We just haven’t been consistent as a team,” said Mitchell about this year’s play. “Part of it’s because we’re young and part of it is because of things that [coach Bill Laimbeer] is doing with the lineup. He’s been changing the lineup a lot throughout the season—trying to find different combinations. It’s tough to get chemistry going when things are changing so much.”

Mitchell said 2013 has been a tough year on everybody, coaches and players. Whether or not they’re in playoff contention, she promises the team will play hard in the remaining games on the road in Indiana (Friday) and Washington, D.C. (Sunday). She offered appreciation to the team’s veterans, Katie Smith and DeLisha Milton-Jones, for imparting their wisdom and experience.

“They’ve done a great job providing leadership and a lot of mentoring for everyone,” said Mitchell. “We’ve greatly appreciated them this season.”

As a point guard, Mitchell sees her leadership role in terms of getting everyone on the floor organized and on the same page. All the players with multiple seasons in the league did their utmost to encourage the rookies.

In the offseason, Mitchell will play in Australia for the first time. It’s where her mother’s family is from, so she will have the opportunity to see relatives while gaining new basketball experience.