Celebrating Labor Ties To The Community 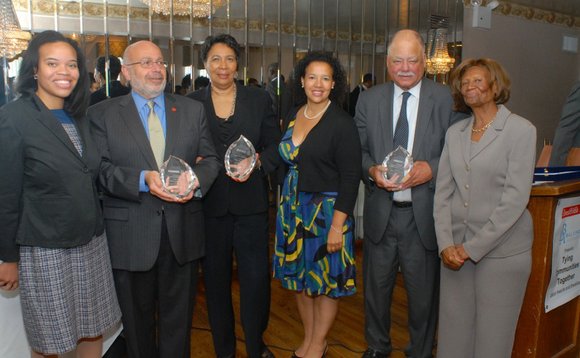 The New York Amsterdam News and Bill Lynch Associates hosted their annual Tying Communities Together Labor Breakfast: A Celebration of Labor Movement at the Alhambra Ballroom in Harlem on Thursday, Sept. 19. The breakfast event brought together social and political labor leaders from across the city to pay homage to three remarkable achievers of our community: Vivian Fox, executive director of 1199SEIU Child Care Funds; Stuart Appelbaum, president of the Retail, Wholesale and Department Store Union of UFCW; and David R. Jones, president and CEO of the Community Service Society of New York.

Fox was appointed to her position in January of 2006. She previously held the title of president and CEO of the National Medical Fellowships Program. In addition to her unwavering service and dedication, she served as the executive director of the YWCA of the city of New York and has worked as a consultant to the Ford Foundation and the Carnegie Corporation. Fox holds a bachelor’s degree in political science from Hunter College. In March of 2007, Mayor Michael Bloomberg appointed her to the New York City Commission on Women’s Issues.

As an active member on several boards and councils, Fox holds more than three decades’ worth of experience and knowledge in social service and health programs. She aims to improve the quality of life in New York. Elinor Tatum, publisher and editor-in-chief of the New York Amsterdam News said, “We’ve got three great honorees for this year, and we are so pleased to be able to recognize these labor leaders. They have made such an impact, and the labor movement as a whole makes a life-changing impact on communities of color.”

Appelbaum became the president of the Retail, Wholesale and Department Store Union in May of 1998 and was re-elected in 2002, 2006 and 2010. Appelbaum serves as an international vice president and an active member of the executive board of the 1.4 million-member United Food and Commercial Workers International Union. Along with these titles, he previously served as a secretary-treasurer, executive board member, assistant to the president and coordinator of special projects for the union. He holds the position as an officer of two major global union federations, International Union of Food Associations and Union Network International. Appelbaum graduated with honors from Harvard Law School. Appelbaum is a summa cum laude graduate of Brandeis University, where he was named a Louis Dembitz Brandeis Scholar.

Jones is a strong advocate for low-income New Yorkers. He has proven his commitment within his community by serving as an executive director of the New York City Youth Bureau from 1983 to 1986. He acted as as special advisor to Mayor Ed Koch from 1979 to 1983, and tackled vigorous responsibilities such as race relations, immigration reforms and urban development within the city. Jones was appointed by Bloomberg to serve in several commissions, including Bloomberg’s transition committee.

From 1996 to 2000, Jones was appointed chairman of the board of Carver Federal Savings Bank, the largest African-American-managed bank in the nation. As a 12-year member of Wesleyan University’s board of trustees, Jones has devoted his time to preserve facilities and underdeveloped communities in the New York City area. He previously served as a chairman of the National Committee for Responsive Philanthropy, which strives to make philanthropy more responsive to politically, socially and economically disenfranchised people. Additionally, Jones is a founding member of the Upper Manhattan Empowerment Zone, where he served for seven years as the president of Black Agency Executives. Jones received his bachelor’.s degree from Wesleyan University, where he received an opportunity to intern for the late Sen. Robert F. Kennedy in Washington, D.C.

On honoring this year’s advocates, Bill Lynch, the third head of Bill Lynch Associates, expressed his gratitude toward the fraternity of labor and communities of color. “Tying Communities Together is an annual tribute to New York’s labor movement, its community members and union leaders. The fraternity between labor and communities of color requires regular interface in order to maintain a strong alliance and promote both our ends. I am happy to help facilitate that coalition.

“The labor movement was very close to my father’s heart and, in turn, very important to Bill Lynch Associates and me,” Lynch continued. “Bill Lynch Associates represents some of the most progressive labor unions in the city and we will continue to work faithfully on their behalf.”