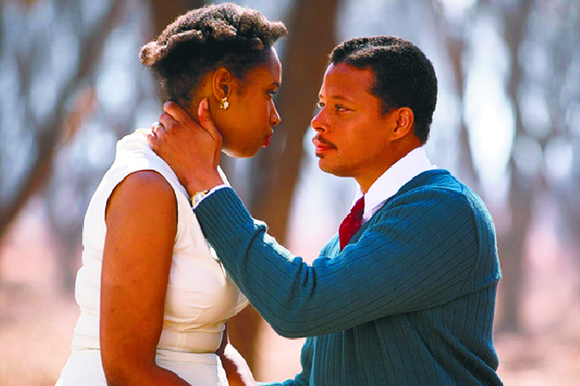 The story of Nelson and Winnie Mandela is a fascinating one: Nelson Mandela was jailed for 27 years for his anti-Apartheid activism and then later became the symbol of change as he became the president of South Africa, and Winnie Mandela became a controversial activist who was referred to as the “Mother of the Nation” before being vilified for her methods. There is a lot of importance, subtlety and history to a story like this, but the new movie “Winnie Mandela” fails on all accounts to bring this story to light.

In the beginning of the movie, we see the birth of Nomzamo Winifred Zanyiwe Madikizela, her parents’ sixth daughter, who her father wished had been a boy. In her attempt to please her father and be the son he never had, Winnie Mandela (Jennifer Hudson) grows up challenging the boys around her, fighting them with sticks and challenging gender roles and tradition. From the onset, we’re presented with the cliché of a girl who seeks her father’s approval and the over-sentimentality that thoroughly saturates the rest of the film.

The film covers a large span of time, starting with the courtship of Nelson and Winnie Mandela and ending with Winnie Mandela’s fall from grace and Nelson Mandela’s presidency. This span of time seems to be too much for director Darrell Roodt to handle, because the result is a clumsy, insincere, slipshod film that barely skims the surface of the story of these two important figures. The film resorts to sloppily throwing in newspaper headlines, photographs and news broadcasts to convey the story and provide the political and historical backdrop rather than the plot itself. This, combined with the cheap, emotion-eliciting tactics (such as the thoughtfully placed but ineffective tender flashbacks), just highlights more of the film’s failings.

The relationship between the Mandelas, which is meant to be the heart of the movie, is uninteresting and lacks any real romance or drama. Howard and Hudson lack chemistry. Howard, who is usually known for his biting wit and dangerous charm, is unbelievable and bland as the great politician and activist, and Hudson, who usually rises to the task in presenting strong female characters, also succumbs to a great amount of flat, blank-faced acting and does not fully demonstrate the turn in Winnie Mandela’s character from the strong, adored “Mother of the Nation” to the vilified and controversial character she later becomes.