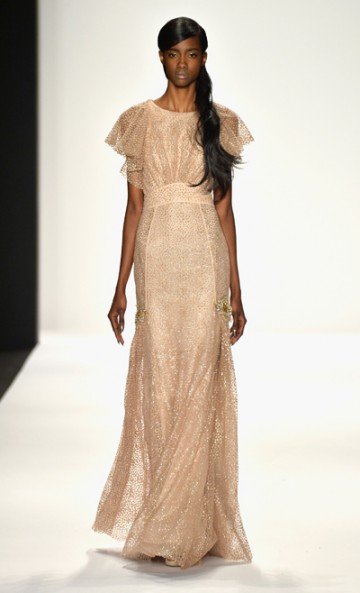 Evening elegance showed up best for fall 2014 at Badgley Mischka’s show during Fashion Week in New York. “Our style harkens back to the glamorous Hollywood of the ’40s,” said James Mischka. “The Badgley Mischka signature style is simple, streamlined and thoroughly elegant.”

Mark Badgley and Mischka offer a unique synergy together. They are a talented duo who met while they were studying at Parsons School of Design in New York. They share a similar aesthetic about clothes and the way people dress.

Both men spent time designing for big names. Before they developed their own brand, Badgley designed for Donna Karan, and Mischka created the men’s collection for WilliWear by Willi Smith. You remember Smith, the extremely legendary, talented African-American designer of the 1970s. 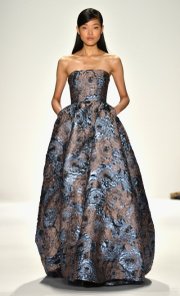 Both Badgley and Mischka have been hailed by Vogue as one of the “Top 10 American Designers” and as the darlings of the Hollywood set. This design duo has made its mark over the past two decades with their glamorous, stylish and wearable evening wear and accessories.

Badgley and Mischka’s designs are constructed of the finest fabrics and exhibit superior craftsmanship. There is always an element of interest, either in the silhouette or with the luxurious detail. They have remained true to this design philosophy. The consistent integrity of their collections has pushed them to the forefront of fashion. Their timeless designs appeal to a range of fashionable women, including celebrities like Madonna, Catherine Zeta-Jones, Jennifer Lopez, Sharon Stone, Jennifer Garner and Julia Roberts.

“One zip and you’re glamorous!” remarked Badgley. “We like to keep things effortless. It’s fabulous if you can spend hours getting ready, but a woman should also be able to bring a dress to work and change there for an evening out.”

Badgley Mischka is sold in the most prestigious stores in the world, including Bergdorf Goodman, Neiman Marcus, Nordstrom and Saks Fifth Avenue, in addition to Badgley Mischka boutiques in Beverly Hills, Calif., and New York.