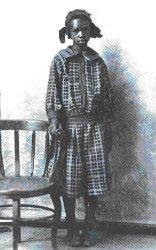 In the final days of this year’s Women’s History Month, there isn’t a better way to close it than blending the past with the present and to tout a local author writing about a virtually unknown Black girl from Oklahoma. Tonya Bolden of the Bronx is one of the nation’s most prolific authors, and her books have garnered a shelf full of awards.

A few weeks ago, renowned author Walter Dean Myers bemoaned the lack of children’s books by and about African-Americans, citing the small number among the thousands produced each year. Bolden’s contributions—and particularly her most recent one, “Searching for Sarah Rector: The Richest Black Girl in America” (Abrams, 2014)—provide a bit of respite from the disparity.

Find out more: Tonya Bolden’s advice is spot-on, and the best place to begin in pursuit of Sarah Rector is with Bolden’s book and the acknowledgments she mentioned. Furthermore, there is the online material that she referenced, and that should keep you going for a while.

Discussion: Guardianship is a topic that is significant to this story, and teachers and students may want to engage in a longer chat about the subject and how it is important beyond Rector’s predicament.

Place in context: The guts of this story happened at the dawn of the last century as Indian Territory became the state of Oklahoma. More can and should be said about the Native Americans and how they figure into Rector’s story and American history in general during this era.

Mentioning Rector as the richest Black girl in America is alone enough to grab the attention of most readers, be they young or old, and Bolden’s illuminating discussion is geared toward a young adult audience. But the “Searching” in the title also titillates and makes you wonder what happened to her that folks are looking for her—did she deliberately vanish, or was she kidnapped?

Rector, who was born in 1902 in Indian Territory, first gained national attention from an article published in the Chicago Defender. “Richest Child of the Race Mysteriously Disappears,” the article announced. “Where is Sarah Rector?” is the question that pops up several times in the article, but only in the last paragraph is there any indication of why she is the richest Black girl in America.

Apparently, Rector’s family received a land allotment as a member of the Creek Nation when Oklahoma became a state in 1907. Rector’s take in all this, eventually, was forty acres, and in 1911, the land was leased by a major oil company. She, or at least her guardians, received $160 an acre. Soon, there was another lease on the land but only half as much as the previous one, Bolden noted. After oil wells sprung up around her property in Taft, it was only a matter of time before she too would experience a gusher. It came in 1913.

A local newspaper reported that Rector’s well was producing 2,500 barrels of oil a day, or 105,000 gallons. “With the price of crude oil about a buck a barrel, that was more than $300 a day for Sarah,” Bolden wrote. The money was flowing in but not until she was 18 would any of it be hers to spend. In fact, according to one story in the Defender in 1913, Rector was forced to live in a shack.

The front-page story also was upset that Rector’s guardian was a white man; her family, too, was accused of being “ignorant.” Fortunately, the court stepped in to protect her accumulating wealth, and her guardian built her a decent home. Meanwhile, she and her riches were the source of countless news stories, and she began receiving requests for donations and marriage proposals. The publicity became a burden, and this may have prompted her sudden disappearance.

Now, the search was on for her—a search that did not interfere with the money that was pouring in from the oil wells and later from the investments made by her guardian with court approval. Then came the real estate purchases, buildings and interest on money lending. By March of 1920, she was worth an estimated $1 million—about $11 million today. With all the wealth and publicity, it’s hard to believe she was still missing, though there were notices of her being a student at Tuskegee Institute.

March 30, 1969: Multitalented entertainer and Harlem-born Sammy Davis Jr. receives the Spingarn Medal from the NAACP in tribute to his dedication to the Civil Rights Movement.

April 2, 1939: Legendary singer Marvin Gaye is born in Washington, D.C. He was shot and killed by his father in Los Angeles one day before his 45th birthday.

April 3, 1996: Harlem native Ron Brown, the nation’s first African-American secretary of commerce, is killed in a plane crash in Croatia. He was 54.

“Sarah Rector wasn’t living near Taft, or in Tuskegee,” Bolden concluded. “She was in Kansas City, Mo., where her family had relocated a few years earlier. There, the Rectors eventually moved into a home that was a far cry from that weather-whipped two-room cabin in which Sarah began life. This home-place was a stately stone house. It became known as the Rector Mansion.”

It took a number of court proceedings to free Rector of one guardian and to select one approved by her family. By 1922, when she was 20 years old, she was free to make her own decisions about her money. Subsequently, there was a failed marriage and three boys to raise. She married again in 1934 and remained with William Crawford, a restaurant owner, for the rest of her life.

She died on July 22, 1967, following a stroke, Bolden wrote. “The search continues for more information on the person once ballyhooed as the richest Black girl in America,” Bolden explained. “No easy task. As an adult, she no longer hid under the bed to escape unwanted attention, but, as her son Clarence told a reporter in the 1990s, Sarah Rector was ‘a very private person.’”

Bolden has done a remarkable job digging through court records, conducting interviews and piecing together a jigsaw puzzle of scraps to give Rector a fresh moment in history, and, more importantly, bringing to light one of the great mysteries of African-American history.

In an interview with the School Library Journal, Bolden elaborated on the project and offered advice to her young readers:

“As much as I love researching online,” she began, “there are always good books I need to read and good people I need to meet in person, online or over the telephone. For example, in some of the newspapers I read online, I found Muskogee County Court notices about Sarah Rector’s estate, notices that included the probate case number. So I called Muskogee County District Court and asked about getting copies of whatever was in that file. When I was told that those records were in deep storage, my heart sank. But I held out hope. I sent my contact at the court, deputy clerk Linda Garrison, a copy of my book ‘Maritcha’ (Abrams, 2005) and explained that I wanted to do a book on Sarah Rector—sort of like that book. A few weeks later, I received the first of many, many thick packages with photocopies of documents from that probate court case.

“That was in January 2011,” Bolden continued. “By June, I had a mountain of paper. I later learned that another outfit has all or most of the documents on microfilm at a location not that far from me, but, hey, you start where you are. Plus, I had a real person at the Muskogee County District Court off whom I could occasionally bounce things and ask questions. You can’t talk to microfilm. I often tell young people that if they want to know about process, take a look at my acknowledgments for starters.”