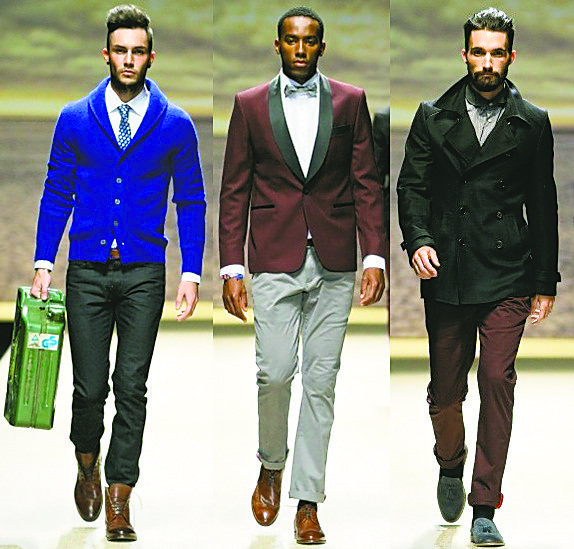 In less than a fortnight, 10 local African menswear designers showcased their autumn-winter collections at Mercedes-Benz Fashion Week Joburg (MBFWJ). The show, featuring African Fashion International designers, was held from March 20-22 at the Sandton Convention Center. The global luxury menswear market, which makes up to 40 percent of the global market, is growing at about 14 percent per year.

“African Fashion International (AFI) is committed to assisting in the growth of fashion-related industries in response to market trends. The overwhelming increase in the demand for high-end men’s clothing makes it an ideal market,” said AFI spokesperson Nicholas Maweni.

The emergence of the “metrosexual” male has sparked a new era in menswear. Many men are becoming increasingly enthusiastic about fashion and their personal brands, fueling the growth of this market and the entire fashion industry as a result.

In the AFI show, six designer collections were featured. The labels included Fabiani, Augustine, Ruald Rheeder, Laduma, Viyella and Adriaan Kuiters + Jody Pausen. David Tale, who made a splash in the recent New York Lincoln Center shows, was also in the lineup.

Each of these collections presented a fresh, innovative take on men’s clothing preferences and the masculine form. The exceptional talent of the 10 menswear designers showing at MBFWJ 2014 is proof that the quality of local fashion is on par with the looks of top world-class designers. These stellar menswear designers have taken their place alongside 24 of the country’s leading women’s couture labels, also showcased at this presentation.

The show was extraordinary. Fashions were impeccably tailored. From Fabiani, the audiences appreciated a comprehensive, trend-focused menswear collection. Inspired by true Italian styling of high-quality and premium workmanship, there were signature “pops” that magnified the Fabiani flair. Augustine’s autumn-winter 2014 line is a fusion of three elements: a local and international street culture, label trademark tailoring and texturing (both literally and figuratively). Ruald Rheeder’s autumn-winter 2014 collection takes a fashion trip to the dark side. They featured predominantly black garments in luxurious fabrics and textures.

For MBFWJ 2014 collection, Laduma presented Maxhosa. This collection celebrated the symbolism and cultural aesthetic of designer Laduma Ngxokolo’s Xhose heritage. Viyella’s looks were inspired by the sophisticated exhilaration of a luxury African safari. Color inspiration stemmed from the dusty Savannah and hues of the Serengeti. For Adriaan Kuiters’ collection, designers Adriaan and Jody Pausen presented a capsule collection of classic sportswear with an artful, contemporary twist. The inspiration for this selection is rooted in classic sportswear, fusing elements of men’s suiting to street wear.