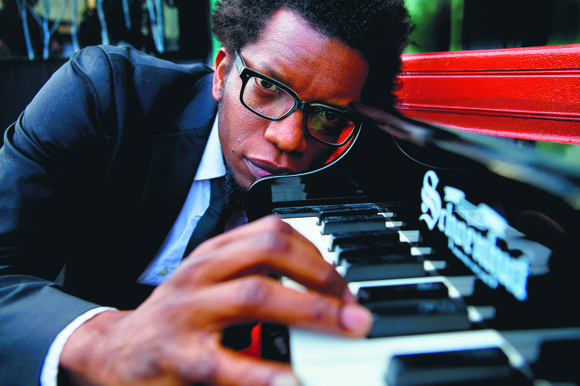 When the trumpeter Roy Hargrove first visited New York City in the 1980s, he was a teenaged young lion who was already impressing his elders. During his recent engagement at the Blue Note, Hargrove demonstrated his successful transition into an innovative musician who takes his audiences on exhilarating journeys more swinging than any rollercoaster ride.

The adventurous composer-trumpeter and flugelhorn player totally understands the concept of swing. “If people don’t feel anything, then they will not listen or go out to live concerts,” stated Hargrove.

The Texas native mixes straight-ahead, bop, R&B and funk into one pot of good music brew. He has a hard swinging style like his predecessors Lee Morgan and Freddie Hubbard. He dared to take Sam Cook’s “Your Sweet Loving” and reconstructed it into a funked up, bluesy tune with a jazz-infused harmony. His quintet featuring alto saxophonist Justin Robinson, bassist Ameen Saleem, pianist Sullivan Fortner and drummer Quincy Phillips was a cohesive unit that flowed with intuitive instinct.

Hargrove’s recently written original “A Simple Task” was a breezy, up-tempo blues number led by bold alto saxophone riffs. Although the trumpeter isn’t known as a singer, he is including more vocals into his repertoire. For this show, he took the standard “Never Let Me Go.” We may have a young Louis Armstrong vocalist on the horizon.

Possibly taking a note from Cannonball Adderley, the quintet ended with a blazing, foot-stomping, funky blues tune. Similar to a New Orleans band, Hargrove and Roberts marched through the sold-out audience playing vigorously. At the end, the bassist was left on stage to close out the number.

“If the people don’t feel the music, what is the point?” Hargrove once said during an interview.

Hargrove isn’t one to be categorized. He is interested in playing good music without boundaries obstructed by categories like jazz, R&B, blues or funk. For this reason, he leads a few different configurations, including RH Factor, which brings hip-hop, funk and jazz together. In 2003, he recorded “Moment to Moment” (Verve), an album of jazz standards with strings. He also utilizes a big band and trio to keep it all moving

When Hargrove is on the bandstand, you can be sure the music will be invigorating. The multi-Grammy Award winner is a stylish, independent dresser who favors bowties with plaid shirts, fitted suits and sports jackets, hats and, for this gig, a short-cropped Mohawk haircut.

Once the audience at Dizzy’s heard the first notes from pianist-composer Aruan Ortiz, it was clear he’s only interested in taking the music down unchartered paths.

Although the pianist has only been in New York (residing in Brooklyn) since 2008, his reputation precedes him in both original compositions and playing ability. The classically trained violinist and pianist has a sound close to Thelonious Monk, and one has to make such a statement quietly because we know there is only one Monk, but Ortiz is on that very unique train.

On his restructure of Monk’s “I Mean You,” he went for a variety of mixed melodic notes and a long bass solo. Rez Abbasi, upfront on electric guitar, brought another dimension to the quartet with bassist Sean Conly and drummer Gerald Cleaver. His take on Ornette Coleman’s “Open and Close” was a coat of refreshing jazz that surprised and jumped with an avant-garde flare. HIs original “Paris Blues” was dipped in harmonic phrases and swinging notes.