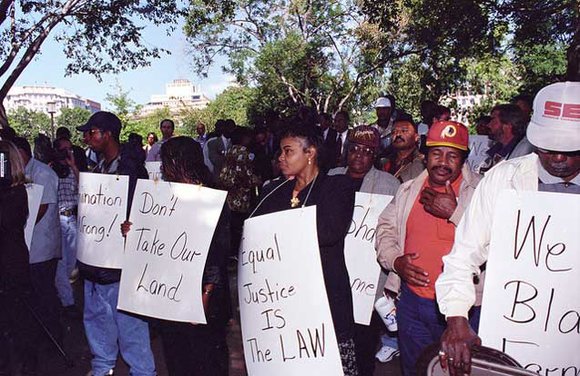 Three years ago, after years of protests, numerous failed congressional bills and dozens of lawsuits, President Barack Obama signed the bill authorizing compensation for discrimination in farm lending at the hands of the United States Department of Agriculture.

The settlement benefits thousands of Black farmers who say they were denied loans and other assistance for years by federal agriculture officials because of their race. Thousands of farmers received payments as part of a 1999 class action settlement in a case known as Pigford I.

This second round of payments (Pigford II) is part of legislation designed to pay farmers who missed the filing deadline for Pigford I. Obama, who supported the settlement when he was a senator, signed the bill into law in December 2010.

“The U.S. District Court’s approval of the settlement between the Department of Agriculture (USDA) and plaintiffs in the Pigford II class action lawsuit is another important step forward in addressing an unfortunate chapter in USDA’s civil rights history,” said Obama. “This agreement will provide overdue relief and justice to African-American farmers and bring us closer to the ideals of freedom and equality that this country was founded on. I especially want to recognize the efforts of Secretary [of Agriculture Tom] Vilsack and Attorney General Eric Holder, without whom this settlement would not have been reached.”

Recently, Black farmers protested in front of the USDA office in Montgomery. The farmers say they’re not getting their payments and their complaints are going unanswered.

“We have findings of discrimination, breaches of contracts, and we also want to continue to farm the land. We are coming to stand today to fight for justice, because the USDA has destroyed all our lives and discriminated against us across the country,” said Michael Stovall, a Black farmer from Alabama who has been fighting the USDA for 20 years.

The protests are not just in Alabama. Similar demonstrations are being held nationwide.

“I have been advocating for justice for Black farmers for the past 30 years. I went to Congress and successfully campaigned for three bills,” said John W. Boyd Jr., a fourth generation Black farmer, businessman and civil rights activist. He is the founder and president of the nonprofit National Black Farmers Association, a position that has frequently placed him in the national spotlight.

Boyd said Congress lifted the statute of limitations for his group’s claims in 1998. In 2008, Congress passed a bill allowing the claims of late filers to be heard. Then, in 2010, Congress approved $1.25 billion in payments to compensate the Black farmers.

“The struggle seems never to be over for Black people. We won in court. We won in Congress. Now that we have prevailed, playing by all the rules, the game is suddenly flawed.”