Michael Walrond: ‘The outside candidate’ 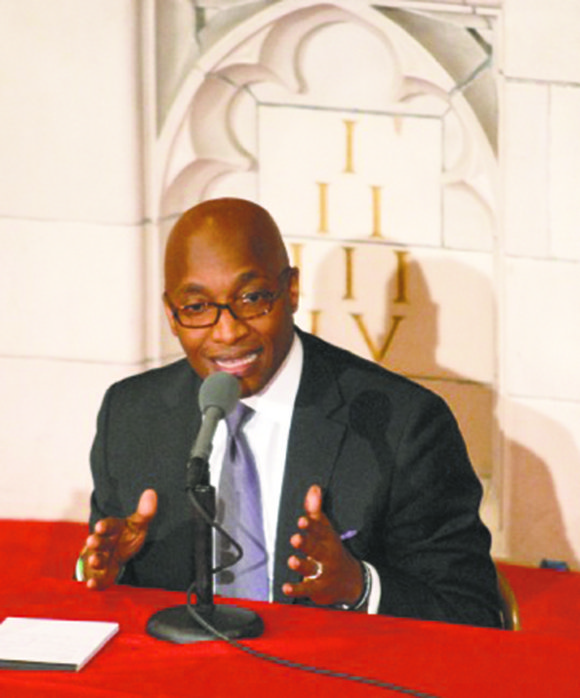 “Now is the time,” according to young, bright-eyed political newcomer Michael Walrond, one of the two candidates looking to unseat long-time Harlem Rep. Charlie Rangel in what is being considered one of the most competitive races in the midterm elections.

Walrond also faces state Sen. Adriano Espaillat in the race for the newly rearranged 13th Congressional District, which has a large Latino population. All three are looking to be the Democratic candidate for the seat after this summer’s primaries.

Walrond is best known as the innovative, breakout senior pastor of First Corinthian Baptist Church for the past 10 years. His church, which has a weekly attendance in the thousands, is considered the church of choice for new and young Harlemites recently moving to the neighborhood.

The church is also known for its inclusiveness, which many believe churches in Harlem lack as the face of the neighborhood changes. First Corinthian has also made a name for itself in the community with its various services and outreach.

The church’s success has thrust Walrond and his family into the spotlight as he becomes a leader and political player in the Democratic Party. He now has his sights set on becoming the next congressman for the 13th District.

His campaign is marking a pivotal moment in uptown politics by getting those involved in the process who have never been involved before. Riding on the wave of the election of President Barack Obama, Walrond is counting on new voters who not only got engaged during Obama’s election but are extending themselves from the work Walrond has already done through the church.

“The decision to run is one I have been thinking through for the past two or three years,” he said in a recent interview with the AmNews. “People in the community feel that there needed to be stronger elected officials in the community in so many ways and who wanted break from the norm.”

Walrond added that people he has spoken with have become weary of “career politicians,” and the focus is no longer on the people. And Election Day numbers show that. With over 700,000 people living in the district, only around 5 percent turned out to cast their vote.

“I think people vote out of habit instead of issues, and we vote out of loyalty instead of thinking of vision and future for the district. There is a such a cynicism about politics in this community,” he said.

Similar to how “outsiders” have flocked to his church, Walrond wants to create a similar tactic when it comes to politics. Over the years, he said, many in the district have been left out of the political process, so much so that it makes them disengaged. However, he knows he’s not taking the average route to becoming a congressman. While many first seek lower offices on the city and state level, Walrond says he’s ready to leap into the office, which would have him making decisions about the direction of the nation.

“Democracy doesn’t have little steps,” he said. “There is not a rule or law that states that there must be steps taken to run for a particular office. If you have passion for people, a passion for the country and a passion for a community like this one, then you run, and you run for the office you feel you will have the greatest impact.”

Walrond said he’s well aware of the “political machine” in Harlem, leading many who find out about him to believe he has no chance of winning. His tactic for winning: speaking to the human need regardless of who you are.

While the usual issues—including housing, jobs, education and safety—are key points in his campaign, Walrond said that transforming the office into what it should be is at the top of the list.

“One of the things I really want is for people to see and hold all three of these candidates to task and to be clear about the role of this office,” he said. “I’ve been to enough forums and have had enough conversations that sometimes I realize that people in positions of power have a tendency to prey on that lack of knowledge of the people they hope to lead. There are people who are not aware of the responsibility and role of someone who is in Congress.”

As Walrond continues on with his campaign, he recently faced off in a debate between Rangel and Espaillat and is attending a congressional forum this Saturday at Minisink Townhouse.