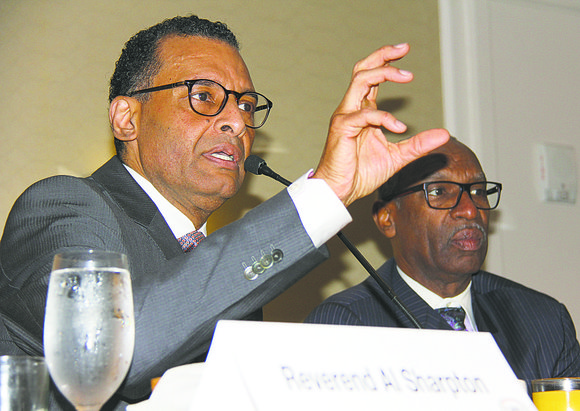 While President Barack Obama was the star speaker of the Rev. Al Sharpton and NAN’s 16th Annual National Convention on Saturday, over 5,000 people attended the four-day event, making this the largest convention to date and the biggest national civil rights convening of the year.

Hosted at the Sheraton New York Times Square Hotel, speakers and panelists covered every field, from housing to criminal justice to employment to education. For example, at the National Education Breakfast, the keynote speaker was U.S. Secretary of Education Arne Duncan. On another panel, speaking on the burgeoning issue of housing, was U.S. Secretary of Housing and Urban Development Shaun Donovan.

Obama in the crowd at the 2014 National Action Network Convention

Additionally, “Today’s Young Professionals, Tomorrow’s Leaders: Steps to the Executive Office and Beyond” was moderated by Janaye Ingram, the D.C. bureau chief of NAN, with panelists including Brian Benjamin, founder of Young Professionals United for Change. Gun policy and anti-violence was addressed by the forum “The New Jim Crow: Guns, Drugs and Mass Incarceration,” moderated by Mark Thompson, host of “Make it Plain.”’