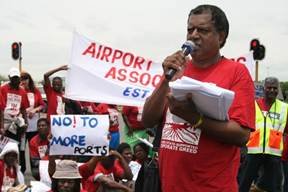 Desmond D'Sa, a community leader and co-founder of the South Durban Community Environmental Alliance in 1996, campaigned against toxic waste dumping in South Durban, a poor but highly industrialized area, finally successfully obtaining the closure of the chemical dump.

In partnership with the California-based nonprofit “Global Community Monitor” and helped by local residents, D’sa provided the proof about what was really going on with the air pollution and illnesses in the area. An analysis of air samples, collected by residents, showed high levels of benzene, a confirmed carcinogen, and several health studies found incidence of asthma in 52 percent of the children and a quantified cancer risk as 25-in-100,000 people, compared with the norm of 1-in-100,000.

Leading an arduous campaign to lobby officials, his efforts resulted in the closure of the dump.

D’Sa paid a high price for his work. In 2011 his home was firebombed. “We face dangers all the time because we stand up for justice and truth and for people who can’t speak for themselves,” he said. “But that will not deter me from doing what’s right. I’m not going to be afraid.”

Today D’Sa is fighting a proposal to dramatically expand the port of Durban, whose expansion would displace thousands of South Durban residents and exacerbate waste, pollution and traffic in the neighborhood.

The winners receive $175,000 and a bronze sculpture called the Ouroboros that depicts a serpent biting its tail, a symbol of nature’s power of renewal in many cultures.

Other winners of this year’s include the Indonesian biologist Rudi Putra who dismantled illegal palm oil plantations causing deforestation, Russian zoologist Suren Gazaryan , who exposed government corruption and illegal use of federally protected forestland along Russia’s Black Sea coast; Ruth Buendia from Peru, who stood up to dam construction that would have uprooted indigenous people; the American attorney Helen Slottje, who provided pro-bono legal assistance to defend many towns targeted by gas drilling operations; and Ramesh Agrawal from India who, from his small Internet café, began a successful campaign to stop a huge coal mining project in an area already affected by pollution.