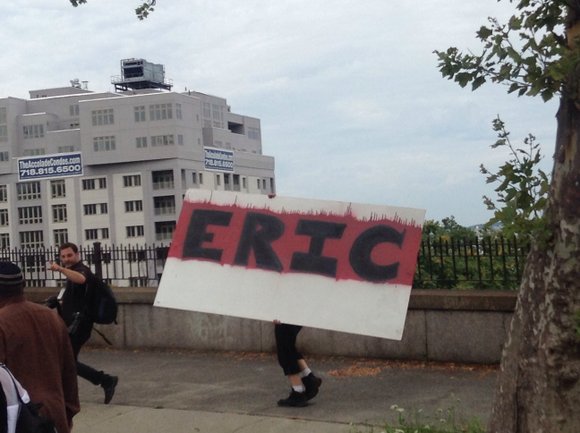 Each day brings new developments in the death of Eric Garner. Last Friday, the city’s medical examiner announced that Garner’s death resulted from a chokehold, something that was evident from the cell phone video of the encounter.

On July 17, Garner, 43, and the father of six children, was approached by uniformed and undercover police officers who sought to arrest for peddling illegal cigarettes in the Thompkinsville section of Staten Island. When Garner refused to be handcuffed, pleading with the officers that he had done nothing wrong, Officer Daniel Pantaleo slipped behind him and grabbed him in a chokehold, wrestling the more than 300 pound man to the pavement.

Other officers surrounded Garner and pinned him to the sidewalk, Officer Pantaleo pressing his head severely while others kneel on his body. “I can’t breathe, I can’t breathe,” Garner can be heard repeatedly. But the officers continue hold him down though he’s clearly immobilized.

According to the report from the medical examiner and a statement from the office by Julie Bolcer, Garner died as a result of “compression of neck, compression of chest and prone positioning during physical restraint by police,” she told the press. Garner also suffered from obesity, acute asthma, and hypertensive cardiovascular disease, all of which may have contributed to his death.

“Thank you, Jesus,” said Garner’s mother, Gwen Carr during an appearance last Saturday at the National Action Network. She said these were the first words from her mouth upon hearing the report about her son’s death.

The medical examiner’s report, said the Rev. Al Sharpton, “confirmed what we’ve been saying for the last two weeks. This is about an illegal chokehold that caused his death and that is probable cause for arrest.”

At the moment Officer Pantaleo has been stripped of his gun and badge and placed on desk assignment pending investigation.

A spokesperson for Richmond County district attorney’s office, Douglas Auer, said the investigation of Garner’s death continues. “We await the issuance of the official death certificate and the autopsy report,” he said.

Patrick Lynch, president of the Patrolmen’s Benevolent Association, defended Officer Pantaleo, asserting that his reassignment was “completely unwarranted” and “knee-jerk reaction for political reasons.” He added that the medical examiner’s report “indicates that Mr. Garner was a man with serious health problems so there will have to a complete and thorough analysis of all the factors that played a part in this tragedy. We believe, however, that if he had not resisted the lawful order of the police officers placing him under arrest this tragedy would not have occurred.”

In response to Garner’s death, Bratton announced that all the NYPD officers will undergo retraining. He also reiterated his “broken windows” policy, in which the police are ordered to crackdown on quality-of-life crimes. That “broken windows” policy is being challenged by activists who see it as nothing more than more “broken promises” from the mayor.

“It’s not about retraining the police,” Sharpton retorted to Bratton’s proposal. “It’s about humanity. Even a child understands when a man says I can’t breathe.” He also discussed his comment that about the mayor’s son who could be put in a chokehold, which created quite a furor. “I said that because the mayor’s son did a commercial on stop and frisk,” he explained.

In a related incident, Ramsey Orta, 22, who used his cellphone to video Garner’s death, was arrested Saturday and charged with gun possession. He was seen leaving a hotel on Staten Island with a young female and allegedly slipped the gun to her.

Sharpton, in a press conference on Sunday, quickly said that Orta’s arrest should have no effect on Garner’s case. “His cellphone was the eyewitness,” the reverend said, “not Orta.”

On Monday, Sharpton is scheduled to be in Washington, D.C. to meet with the feds to discuss with them the possibility of handling the Garner affair, if the Staten Island district attorney balks.