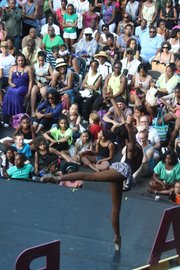 On Saturday, Aug. 9, the Dance Theatre of Harlem will hold its annual Street Festival, just outside of its doors on West 152nd Street between Amsterdam and St. Nicholas avenues. The festival, running from noon to 7 p.m., offers hours of fun and entertainment, including live performances of music and dance by students from the Dance Theatre of Harlem School, along with professional and amateur talent from around the city.

In addition to the Sunday matinees and the new “Thursdays @ DTH,” the Street Festival affirms the organization’s ongoing commitment to the Harlem community. Held every August, the Street Festival entertains, informs and encourages community members to become a part of the Dance Theatre of Harlem family as new students, volunteers and supporters. Over the years, the Street Festival has grown more successful both in content and attendance.

The annual Street Festival has been made possible through the support of many, including but not limited to the West Harlem Local Development Corporation Fund, Tides Foundation, Aetna Foundation, New York City Department of Cultural Affairs, New York Council for the Arts, Emblem Health and New York Presbyterian.