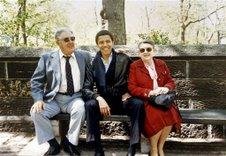 Barack Obama and his grandmother

Forty years later, impeachment is again a word making the rounds, mainly from Republicans who accuse Obama of a number of misdeeds, none of them approaching treason or high crimes and misdemeanors—the only grounds on which he could be impeached.

But Sarah Palin and other GOP members on the right are apparently immune to facts, and if you go to a tea party website, you will see a litany of complaints that they feel are enough to boot Obama out of office.

“America is under attack from within,” the tea party contends. “Over the last four and half years, our nation has been transformed for the worse so much that one could hardly recognize it. We have a corrupt, Chicago politician in the White House who is bleeding our nation to death. Since he won re-election with the help of low information voters and a compliant media, the details of even further corruption has been revealed. The time has come and we must not relent until this happens.”

According to the tea party, Obama is the most corrupt president in U.S. history, and their views coincide with a recent poll that came to a similar conclusion about his presidency, at least since World War II, which makes you wonder who, in fact, were the people polled.

From the tea party’s perspective, the president is to blame for everything from the Benghazi debacle, to the immigration boondoggle, Obamacare, the economic crisis and the national debt. Left to the logic of these thinkers, the Civil War and the failure of Reconstruction are also Obama’s fault.

A more serious concern than the imbecilic cries of impeachment is the vote last week by the House of Representatives authorizing Speaker John Boehner to file suit against Obama on the grounds that he overstepped his executive authority. The lawmakers, voting 225-201, mainly along party lines, with no Democrats supporting the lawsuit, gave the speaker the authority to pursue a lawsuit he had been seeking.

The lawsuit, according to some reports, will hinge on the White House’s decision to provide a one-year reprieve for employers on enforcing a requirement under Obamacare to have health coverage or pay a penalty. That requirement was put off until 2015, but the law was revised, saying employers with 50 to 99 full-time workers would not have to comply or pay a penalty until 2016.

“This isn’t about Republicans and Democrats,” said Boehner. “It’s about defending the Constitution we swore an oath to uphold.”

Obama took exception to the push for the lawsuit. “Everybody recognizes this is a political stunt,” he said. “But it’s worse than that, because every vote they’re taking like that means a vote they’re not taking to actually help you.”

We now have to wait until the lawmakers return from recess to see if the lawsuit gains any traction, which many doubt.

It’s enough for a president to have a full plate of international crises—Libya, Iraq, Iran, Syria, Israel and Palestine—without having to deal with mischief makers at home, including the birthers, who are probably not disposed to say what we gladly add: Happy birthday, Mr. President.