James Baldwin gets his place in Harlem 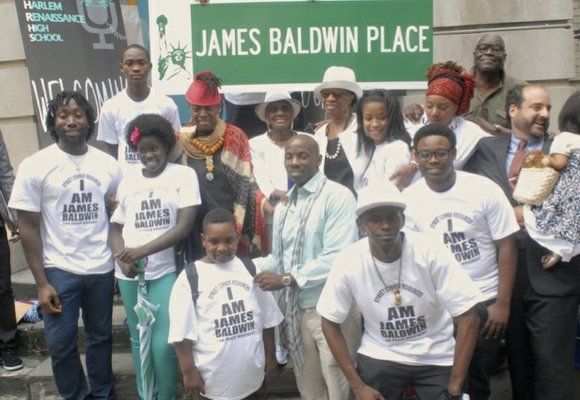 Family and friends of James Baldwin gather for his street naming.

As the old saying goes, the fruit never falls that far from the tree, and Trevor Baldwin, the nephew of James Baldwin, proves that even a relative of the great writer has a way with words. “This is a family affair,” he announced toward the end of a street renaming for his famous uncle.

He meant that both in terms of kin—his mother, Helen, who was married to Lover Baldwin, James’ brother, his aunts Barbara, Elizabeth and Paula—and the extended family that stretched down the block on 128th Street between Fifth and Madison avenues.

This was an appropriate location to honor James Baldwin, a native of Harlem who attended P.S. 24, now the Harlem Renaissance High School, where Nadav Ziemer is the principal. Until a sign reading “James Baldwin Place” was hoisted outside the front door, only a small plaque in the hallway indicated that Baldwin was ever a student there.

But the young singer from Iesha Sekou’s Street Corner Resources was more than prophetic when he sang Sam Cooke’s “A Change is Gonna Come,” and getting “James Baldwin Place” in the neighborhood where the author grew up was mentioned by several speakers, including Voza Rivers and Lloyd Williams of the Greater Harlem Chamber of Commerce, which, along with Community Board 11 and Columbia University, was chiefly responsible for bringing about the change.

In effect, it was practically a James Baldwin day during Harlem Week on what would have been his 90th birthday. He was born Aug. 2, 1924, in Harlem Hospital at a time when Marcus Garvey’s movement was parading below his window.

“Happy birthday, Jimmy!” his sister Barbara Baldwin cried out. She was soon joined by a chorus of voices attempting to summon James Baldwin to his stomping grounds. He died Dec. 1, 1987, in France, which was like his second home.

After citing a number of Baldwin’s publications, Assemblyman Keith Wright recalled that one of Baldwin’s most memorable expressions was, “I want to be an honest man and a good writer.” “And he accomplished both these missions,” Wright said.

The esteemed poet Sonia Sanchez said, “Because of James Baldwin I am.” She opened her remarks singing, “Woke up this morning with my mind on James Baldwin.”

There were a number of proclamations from Councilwoman Inez Dickens, Perkins, Brewer, Wright and Rep. Charles Rangel, represented by Jeff Eaton.

When the street ceremony concluded, many of those in attendance marched down to the National Black Theater, as they had done earlier from the Apollo Theater, for more testimonials from those who knew Baldwin and to read from his books.

And that walk could not have been more delightful, as the Salvation Army Orchestra for Children, who performed at the ceremony, were on hand to provide the music for the march to the theater. It would have matched the music Baldwin heard when he came screaming into the world in a voice that was always there for the voiceless.