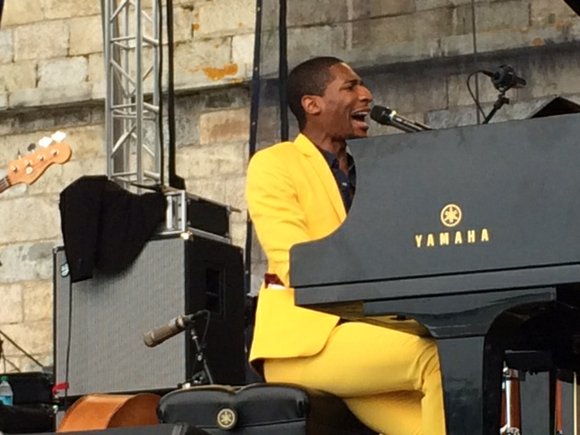 When you are successful, it is easy to rest on your laurels, but a lackadaisical attitude was never a part of George Wein’s mentality, which is why his Newport Jazz Festival just celebrated its 60th year.

During the gala last weekend, after his good friend Bill Cosby introduced him, Wein stated, “I was fighting for respect in jazz.” Newport’s 60 years proves there is respect for jazz and Wein, who had the perseverance to keep it moving on a creative journey with young and established musicians.

This year, the festival was extended to three days, as opposed to its usual two. There was more than enough music to please jazz fans from as far as Sweden.

The International Tennis Hall of Fame had a double bill opening with Dee Dee Bridgewater featuring Theo Crocker. This warm, cloudy night was the singer’s debut at Newport.

As she walked on in a stunning black evening dress, she quickly noted, “I am honored to be on the same stage where Billie Holiday, Ella Fitzgerald and Dizzy performed their musical magic.”

She opened with “Good Morning Heartache,” manipulating the tempo to give herself more room for her sassy interludes, and followed with Holiday’s original “Fine and Mellow.” She has found an intuitive match with the young trumpeter Theo Crocker and his band. Bridgewater produced and is the guest vocalist on his latest CD (“Afro Physicist,” Okeh Records). By the standing ovation, it seems Bridgewater may be returning to Newport.

Next up was Wynton Marsalis and the Jazz at Lincoln Center Orchestra. The orchestra paid tribute to former Newport jazz legends, rearranging their original compositions, including Benny Carter’s “Echoes of San Juan,” featuring Victor Goines on soprano saxophone; Horace Silver’s “Senior Blues,” arranged by Carlos Henriquez; and Benny Carter’s “A Day and a Day or Again and Again,” featuring saxophonist Sherman Urbie.

Marsalis and the orchestra exemplified the definition of a big jazz band. Duke, Basie and Lunceford would have been proud. This was the first time their music grabbed me with such intensity, as well as the rest of the audience, who danced and offered standing ovations.

The sky cried all day, and by 2 p.m., it had rained so much the Fort Adams State Park grounds were a muddy mess. But the loyal jazz fans sat in their chairs with raincoats and umbrellas enjoying the music. Under the pouring sky, the Robert Glasper Experiment mixed it up, with his background developing from a jazz and R&B vibe. The pianist’s arrangement of Bill Wither’s “A Lovely Day,” with Casey Benjamin’s electronically mixed vocals, changed the tune’s sound. When he added his funked up soprano sax to the mix, it really took off, with drummer Mark Coleburg, bassist Burniss Travis and Glasper.

Cecile McLorin Salvant engaged three different audiences, including the sponsor’s gala. During the rain, she captivated a full house, singing “Wives and Lovers,” “Nobody” and “Who Knows.” The young lady has the goods.

She is her own singer still finding her way but definitely on the right path. She is working with a fine trio, consisting of pianist Aaron Diehl, bassist Paul Sikivie and drummer Lawrence Leathers. She is selecting tunes that are not well-traveled by a mass of singers, which diminishes her comparison ratio. Diehl is extremely talented. He reminds me of a young Eric Reed.

The Ron Carter Trio, with guitarist Russell Malone and pianist Donald Vega, bring great music. The rhythmic flow of Carter is exceptional, and his solos were breathtaking.

The Vijay Iyer Sextet had somewhat of a family affair, with Graham Haynes (Roy Haynes’ son) and Marcus Gilmore (Haynes’ grandson). The group moved from straight-ahead to dancing on the periphery of avant-garde.

George Wein and the Newport All-Stars featured Wein on piano, Anat Cohen on clarinet and saxophonist Lew Tabackin, among others. At age 88, Wein continues his musical journey on and off the stage.

Clifford Brown was a genius whose untimely death at age 25 left us a short but impressive legacy that includes four years of recordings. He also influenced such trumpeters as Lee Morgan and Donald Byrd.

Aug. 12–13, Jazz at Lincoln Center and Revive Music will present “Celebrating 60 Years of Sarah Vaughan and Clifford Brown” at Dizzy’s (60th Street at Broadway), two shows each night at 7:30 p.m. and 9:30 p.m. Featured musicians will be trumpeters Sean Jones and Keyon Harrold, pianist Raymond Angry, bassist Chris Smith and drummer Nasheet Waits, with vocalists Kennedy and Joanna Teters. These musicians have joined forces to premiere new arrangements of this classic material from one of the few albums Vaughan and Brown recorded together (“September Song,” EmArcy Records,1954).

Vaughan was one of the greatest jazz vocalists of all time, and along with Brown’s legacy, this celebration will be worth witnessing.