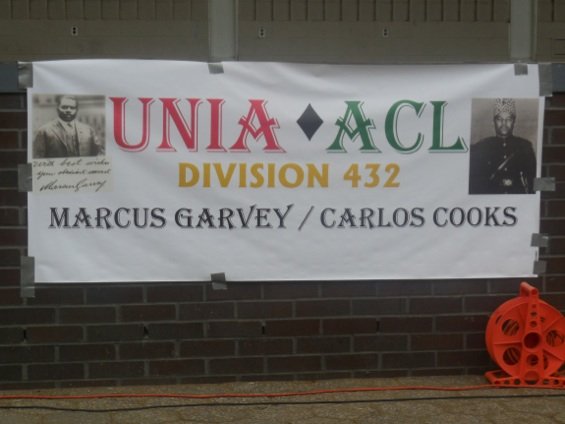 A slew of committed activists converged at the Jamaican embassy in Washington, D.C., July 17 to acknowledge the 100th anniversary of the establishment of the self-determining Universal Negro Improvement Association―African Communities League in Jamaica by Black Nationalist icon Marcus Mosiah Garvey.

The UNIA’s vision of globally uniting all people of African ancestry produced The Negro World in 1918, a weekly newspaper that promoted its ideas. The following year, they purchased their inaugural Liberty Hall, at 114 W. 138th St. in Harlem, where Garvey addressed thousands on a weekly basis. The organization peaked in the 1920s and has unassumingly existed ever since.

Jamaica’s ambassador to the United States, Stephen Vasciannie; the president general of the UNIA, Senghor Baye; and the organization’s assistant president general, Akili Nkrumah; shared reflections about Garvey’s contributions, as well as the UNIA’s overall influences during the past century. They also noted Garvey’s cult status in Jamaica, as well as throughout the African Diaspora.

Vasciannie contends that Garvey’s prominence and overall impact are partly the result of the “special combination of vision and commitment that Marcus Garvey presented to the world during his 52 years, between 1887 and 1940.”

The ambassador added, “We still look for Garvey in the whirlwind because his vision and commitment themselves created a magnificent whirlwind on behalf of the poor and the dispossessed, and because he stood firmly for the rights of all Black people, at home and abroad, under the special banner, ‘One God, One Aim, One Destiny!’”

Bayer emphasized Garvey’s continuing relevance in the lives of activists worldwide, also commenting about the significant contributions women made to the UNIA and lauding the government of Jamaica for having issues relating to Garvey placed in the school curriculum.

Both Baye and Nkrumah expressed gratitude to the Jamaican embassy for its support in commemorating the UNIA’s significant milestone, with Nkrumah stressing the links between the UNIA and Jamaica’s national motto, “Out of many, one people.”

Local UNIA admirers and Garveyites also acknowledged the milestone at the park in central Harlem that is named after the self-determining Pan-African leader.

“What the Honorable Marcus Mosiah Garvey and the organization he founded, the UNIA, did was lay out a profound blueprint for all people of African ancestry from all over the globe to link up with so we can know our true history and heritage,” stated cultural critic La Meh Nua.

The 74th annual Black Power Parade commemorating the 127th physical-day anniversary of the Black Nationalist leader departs at 5 p.m. Sunday from Marcus Garvey Park (corner of 124th Street and Mt. Morris Park West). UNIA lieutenant and comrade Carlos A. Cooks established the memorial in 1941, a year after Garvey joined the ancestors. A special acknowledgement will be conducted in honor of Obalewa “Brother Oba” Abileye, who had marshaled the parade and recently transitioned.

“[Africans] should be more determined today than they have ever been,” Garvey exhorted. “Because the mighty forces of the world are operating against the non-organized groups of people who are not ambitious enough to protect their own interests.”

For more information, see the articles “New Yorkers Celebrate Garvey with Cultural Show, Parade” in The Gleaner at http://jamaica-gleaner.com/gleaner/20140719/ent/ent1.html and “Garvey’s UNIA, a Vital and Historic Vision” in the Jamaica Observer at http://www.jamaicaobserver.com/mobile/news/Garvey-s-UNIA-a-vital-and-historic-vision_17198945.