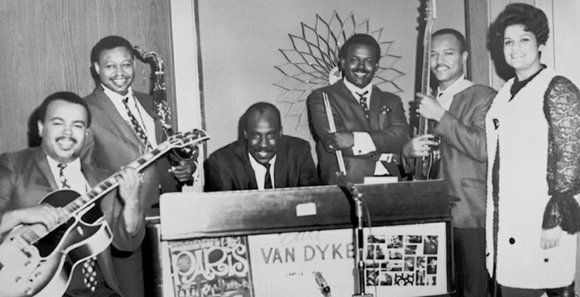 The Funk Brothers with Martha Jean “The Queen” Steinberg

“Get on Up,” the new James Brown biopic, is a film of incessant funk. On Broadway, there is more funk, if a bit more subdued, in “Motown the Musical.” Any mention of Motown evokes the memory of the Funk Brothers, an amalgam of background musicians who were invisible until the 2002 film “Standing in the Shadow of Motown.”

There is not space here to profile all of the many Funk Brothers—among the most recorded members were Earl Van Dyke or Johnny Griffin on keyboards; Benny Benjamin, Uriel Jones or Pistol Allen on drums; James Jamerson on bass; Robert White, Joe Messina or Eddie Willis on guitar—but the core was Van Dyke, Benjamin and Jamerson, all of whom are with the ancestors.

Find out more: As we’ve discovered here, “Standing in the Shadow of Motown,” both the book and the film, is the best introduction to the musicians other than acquiring a discography and listening to the funk masters.

Discussion: It took a slew of years before studio and session musicians were given credit for the creativity that often occurred during the recordings, especially from musicians who were well-grounded in improvisation.

Place in Context: From the late 1950s to the late 1960s, the Funk Brothers were studio musicians on more than 250 copies of Motown records. They were also among the best jazz musicians in Detroit during this period.

Van Dyke (1930-1992) was a versatile musician, comfortable in just about every genre, but his heart was in jazz, even if he saved his “soul” for Motown. With such jazz greats as Barry Harris, Hank Jones and Tommy Flanagan as his idols, the Detroit-born and raised Van Dyke developed his style within the city’s daunting piano tradition. An early indication that he was equal to the challenge occurred in the 1960s, when he was the organist on the Blue Note label with saxophonists Ike Quebec and Fred Jackson. In 1962, he replaced Joe Hunter in Motown’s in-house band, which, at that time, was not called the Funk Brothers.

Some Motown lovers feel that Van Dyke was at his funkiest best on Marvin Gaye’s classic “I Heard It Through the Grapevine” and on the Temptations’ “Run Away Child, Running Wild.” But it was in the nightclubs of Detroit that he gave full expression to his affinity for jazz, and some aspect of that can be heard on his recording “The Motown Sound.”

Motown Records, according to Van Dyke, “was just a gig to us. All we wanted to do was play jazz, but we had families, and at the time playing rhythm and blues was the best way to pay the rent.” Later, in “Standing in the Shadow of Motown,” he admitted that they often interpolated jazz phrases and riffs that were essential elements in their jazz repertoire, especially the creativity derived from improvisation during their jam sessions.

Benjamin (1930-1969) gave the Funk Brothers that singular beat, or backbeat, some would argue. Like many Detroiters, he was a native of Alabama, but it was the city and its working-class intensity and urban energy that supplied Benjamin with the rhythm he perfected. “Papa Zita” was his nickname, and it may have had something to do with the zing or the Latin flavor he would sometimes add to that “pop” Stevie Wonder referred to when praising his playing. “Just listen to all the old hits, ‘My World Is Empty Without You’ or ‘This Old Heart of Mine,’” Wonder recalled. Or, for that matter, on any of the other 250 million-plus copies of Motown records where he and his cohorts performed.

Aug. 10, 1989: Gen. Colin Powell is named chairman of the Joint Chiefs of Staff, the highest ranking officer in the U.S. military, on this date.

Aug. 13, 1892: The Baltimore Afro-American newspaper is found on this date.

Aug. 15, 1957: Cora M. Brown of Michigan, the state’s first African-American female to win a state Senate race, became the first Black woman to hold the post of special general counsel in the U.S. Post Office Department on this date.

But for Berry Gordy, the lifeblood of the Motown hits was bassist Jamerson (1936-–1983). Born in South Carolina, he didn’t arrive in Detroit until 1954, and by the time he graduated from Northwestern High School, he had practically mastered the bass. Five years later, he took a position in the Motown studio and from that seat began his long influence, so much so he was elected to the Rock and Roll Hall of Fame. “Jamie was the man,” Motown immortal Beans Bowles told author David Ritz. “He came out of Washboard Willie and the Super Suds of Rhythm. He set the tone, he laid down the lines.”

When Gaye was asked why the musicians at Motown were never given credit on the recordings, he said, “Because they didn’t make it happen. You give your input out of love and expect nothing or you give it and sign a contract. If you want something, you say, ‘I’m not giving it up until I sign something and get something for it.’” Jamerson told writer Nelson George, “We were doing more on the job than we thought we were doing, and we didn’t get any songwriting credit. They didn’t start giving musicians credit until the 1970s.”

By this time, Motown had moved to Los Angeles and the Funk Brothers were replaced, for the most part, by studio musicians in Los Angeles, mainly a group called, appropriately, the Wrecking Crew. For a while, Jamerson relocated to Los Angeles but became disenchanted with the scene and returned to Detroit. Other Funk Brothers, most successfully, Van Dyke, settled into the jazz community, stabilizing their meager incomes on the concert dates, as house bands in various clubs, and sidemen whenever they got a call from the musicians’ union.

In 2004, several surviving members of the Funk Brothers were lauded at the 46th annual Grammy Awards, where they were presented with the Legend Award. Two years later, a few of them performed with the members of the Philly sound crew on a double album called “The Soulful Tale of Two Cities.”

Another momentous occasion for the Funk Brothers occurred in 2013, when the group received a star on the Hollywood Walk of Fame. Mickey Stevenson, the first A&R man at Motown and who coined the title Funk Brothers, was joined on the dais by Eddie Willis and Jack Ashford, two surviving members of the group. The Hollywood Chamber of Commerce president and CEO, Leron Gubler, on presenting the star, said, “Many of us grew up with their amazing hit songs, which they performed with some of the biggest stars of Motown.” Among the Motown celebs there to help unveil the Walk’s 2,493rd star in the category of “Recording” were Wonder and Ray Parker Jr.

“We have placed the Funk Brothers star next to the stars of famed musicians Dizzy Gillespie, Thelonious Monk and Herbie Hancock,” said Ana Martinez, producer of the Walk of Fame.

Van Dyke, Jamerson, Benjamin and the other Funk Brothers nurtured in Detroit’s vibrant jazz community would have been overjoyed by the placement of the star.