Is police brutality a national epidemic? 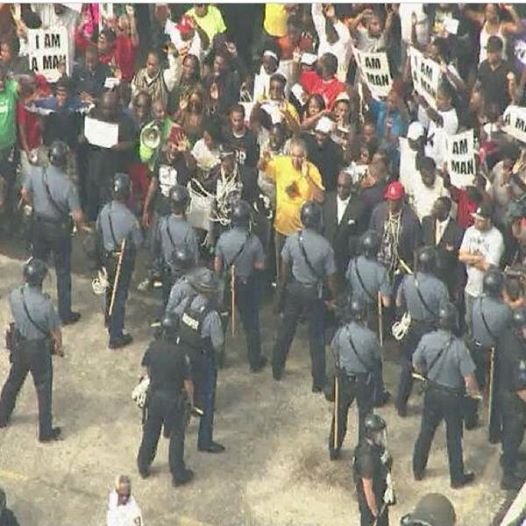 While heavy armored vehicles roll down the streets of Missouri, the outrage simmering dangerously over the shooting death of unarmed teenager Michael Brown has gone viral.

“Stop the killer cops!” is the cry from angry protestors in Missouri, but it could quite easily be the chant on the streets of Staten Island after the chokehold death of Eric Garner or the yell of grieving protestors in South L.A. after the shooting death of mentally handicapped Ezell Ford Monday.

The national crisis of the “epidemic” of police misconduct is leading to “broken windows” of a different type, rather than New York Police Commissioner Bill Bratton’s policy justifying the NYPD code of conduct.

Almost a week after the police shooting death of Brown in Ferguson, Mo., fires are still burning, and there are still daily confrontations betweens cops and the enraged community. Indeed, Ferguson is alight with fury as that community responds with anger to the latest police shooting. Several days of animated reaction have taken over the streets, with images of defiant and challenging protests, youths running through stores, tear gas, and riot shield confrontations with fully armored cops flashing daily on TV screens and swamping the Internet.

The community’s anger is palatable, even on these New York streets in the wake of Garner’s death and the chokehold assault of seventh-months pregnant Rosan Miller, to name just two headline incidents. Across the nation though, emotions are mirrored, what with an allegedly prone and compliant Ford being shot in the back by an LAPD officer.

Brown was killed by police Saturday, yet authorities are still withholding the name of the officer. Ferguson Police Chief Thomas Jackson decided against releasing the officer’s name Monday after social media and phone threats targeted another officer who was falsely named as the killer.

Jackson told the Associated Press that the officer had been with the force for about six years and was patrolling his assigned area when he saw Brown and Dorian Johnson walking in the street. Witnesses say that a scuffle ensued after the officer asked the teens to move to the side. Brown’s hands were reportedly raised when he was shot multiple times.

At least four people, including two officers, suffered injuries at a vigil for the teen, and 47 people were arrested in the aftermath of an officer-involved shooting. Reports say 300 police officers from at least 15 different departments were called to Ferguson when angry crowds began smashing windows, setting fires and looting businesses in the area.

Michael Brown Sr., the teen’s father, called for people to refrain from violence. “I need all of us to come together and do this right, the right way, so we can get something done about this,” he said.

“Don’t be a traitor to Michael Brown in the name of ‘you mad,’” said the Rev. Al Sharpton at a press conference with other African-American leaders this week. “Don’t betray the gentle giant that Brown was by allowing your anger over his killing to lead to violence.”

U.S. Attorney General Eric Holder has said the Department of Justice is investigating the Brown shooting. But with racial tensions high and the level of police mistrust crossing state lines with abandon, many grassroots activists are determining that this is not the time for a “Kumbaya” solution.

“You cannot fault victims taking up resistance in the wake of deadly oppression,” stated former City Councilman Charles Barron. “What community would put up with a police force gunning down its young men without any sort of consequence? Don’t kill our youth in the street and then ask us to respond politely. Don’t ask us to withhold our grief while you don’t even hold the police responsible for the killings accountable.”

The “Jena Six,” Trayvon Martin, Sean Bell, Amadou Diallo, Alberta Spruill, Oscar Grant and Abdul Kamal—the list is endless, but the response is always pretty much the same: loud protests and, for the most part, the police officer responsible for the death gets off scot-free.

“We don’t need marches and rallies. We need boycotts,” suggested Coach Douglas Terry Muhammad, former Nation of Islam secretary to Harlem’s Mosque No. 7. “The last successful boycott was Montgomery—that’s when they listened. You have to hit them hard in the pocket. We need a sustained boycott.”

Meanwhile, the international “hacktivist” organization Anonymous protested in the wake of Brown’s death, saying that if any protesters are harmed, they will post personal information of members of the Police Department on the Internet. They said, “Anonymous demands that the congressional representatives and senators from Missouri introduce legislation entitled ‘Mike Brown’s Law’ that will set strict national standards for police conduct and misbehaviour [sic] in the USA ... Attacking the protesters will result in the release of personal information on every single member of the Ferguson Police Department, as well as any other jurisdiction that participates in the abuse of this state’s own law. We will seize all your databases and email spools and dump them on the Internet. This is your first and last warning … The time has come to bring those to justice who served to protect us, not kill us.”

Letting his thoughts be known through social media, infuriated grassroots activist Bomani Ikemba Mayasa demanded, “What other race of men on the face of this Earth allows their children to be murdered in the streets with no repercussions? Have we become so emasculated as a race of men that not even our babies are worth fighting, killing and dying for? Real men fight for their elders, women and children, despite the odds against them.”

A member of the uncompromising rap group United Front, Mayasa added, “I was taught that if you want a woman’s loyalty ... give her a sense of security. How can a Black woman feel secure with a man who isn’t willing to fight, kill or die to protect the life she pushed out her womb for you? Are we a race of men? Or are we a race of cowards? This ain’t a rhetorical question. We must make a conscious decision to fight or wither away into extinction.”

Activists argue that the longer the police take to bring those involved to justice, the more contentious the community will become. “It seems to me that the most important thing here is to let the facts come out as quickly as possible, sending a signal to the community that the investigation is proceeding and that the investigation will in fact be transparent,” said Cornell William Brooks, national president of the NAACP. “I don’t believe that delaying the name helps the situation.”

Ferguson police have not interviewed Johnson. Freeman Bosley, Johnson’s attorney, said that he offered the police an opportunity to speak with Johnson, but they declined.

Tuesday, President Barack Obama offered his condolences to the family and to those impacted by the death of Brown. In a statement, Obama said that the 18-year-old’s death has “prompted strong passions” but urged people to remember Brown through “reflection and understanding.”

The president continued,“I know the events of the past few days have prompted strong passions, but as details unfold, I urge everyone in Ferguson, Missouri, and across the country, to remember this young man through reflection and understanding.

“We should comfort each other and talk with one another in a way that heals, not in a way that wounds. Along with our prayers, that’s what Michael and his family, and our broader American community, deserve.”

Columbia University professor Marc Lamont Hill posted on Facebook, “Just read President Obama’s statement on Michael Brown. Wish I could say I was surprised or disappointed, but that would imply an expectation of something different. I would rather he had said nothing—as he likely would have if he hadn’t been challenged for eulogizing Robin Williams and not the recent string of dead Black bodies—than to understate and ultimately trivialize the legitimacy of Black rage. I agree that rioting isn’t the answer—at least not looting and destroying our own stuff.

“Ultimately, we need an organized movement. But the president isn’t calling for organized resistance or even righteous anger. He’s asking us to calm down. He’s sending smoke signals to the general (read: white) public that he can calm the Negroes down. I wish he could run for office one more time so that I could not vote for him again.”