Brown family: 'He was executed' 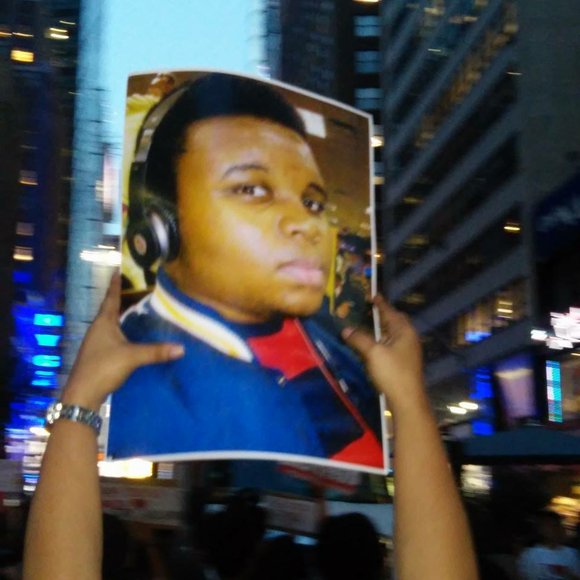 Michael Brown was felled by six bullets, two to his head, according to Dr. Michael Baden, the former chief medical examiner in New York City. Dr. Baden, who conducted the preliminary autopsy at the request of the family, said of the six bullets that hit Brown, only three bullets were recovered from his body.

One of the bullets, he told reporters as they viewed diagrams, entered and exited several times. “This one here looks like his head was bent downward,” he said, pointing to the top of a diagram depicting Brown’s head. “It can be because he’s giving up, or because he’s charging forward at the officer.”

Dr. Baden recounted his findings Monday at a press conference in Ferguson with the family nearby, according to Carl Dix, who has been on the ground there for the last several days. “He said that Michael Brown could have survived the first five shots, but the one to the head was fatal,” Dix told the Amsterdam News Monday afternoon.

Dix, of the Revolutionary Communist Party, USA will be conducting a press conference later on Monday to discuss the attacks on protesters prior to Sunday’s curfew. “The police, at this moment, are working to close all the streets with access to ground zero here at the Quick Trip store,” he added.

How Dr. Baden’s autopsy jibes with two others, one to be performed by the Justice Department will provide more clarity on the circumstances surrounding the August 9 shooting by Officer Darren Wilson in Ferguson, Mo.

Dr. Baden insisted that his information does not assign blame or justify the shooting. He said x-rays have to be examined, access to all the reports from witnesses as well as Brown’s clothing must be examined, which may explain at what distance he was when killed.

Before the autopsy was conducted and after the officer was identified, Brown’s parents and their attorney Benjamin Crump released a statement last Friday. “There is nothing based on the facts that have been placed before us that can justify the execution-style murder of their child by this police officer as he held his hands up, which is the universal sign of surrender,” the statement declared.

Crump also indicated that all the shots came from the front, which Dr. Baden had stated. “It’s so hard for his mother and father to even deal with the notion that this is what happened,” he added. “It’s obvious his hands were up at some point because you can tell how the bullet goes from in and out.”

The attorney also expressed his derision about the release of video that appears to show Brown in a convenience store with his friend Dorian Johnson, one of the key eyewitnesses to the shooting. The man in the store is shown shoving aside the storekeeper with merchandise in his hand that was later said to be a box of cigarillos.