SummerStage music amid the turmoil 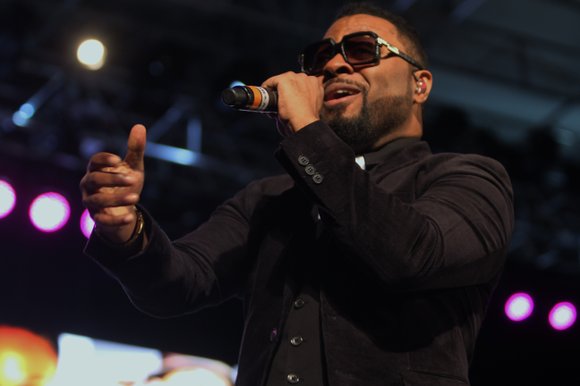 It’s hard to find levity of any kind in weeks like this; however, an attempt was made. Why not? Chilled Saturday, my born day, glued to CNN, monitoring the transgressions in Ferguson, Mo., so maybe a minute to enjoy this fine August weather was in order. Destination: Central Park SummerStage, for what had the potential to provide the perfect diversion. WBLS, the last bastion of soul music, presented its Sixth Annual R&B Fest, featuring Jon B, JoiStaRR, Dave Hollister and Musiq Soulchild. Again, between the actions in Missouri and on Staten Island, the idea of being in Central Park (remember “wilding?”) and being days away from the year 25 anniversary of the witch hunt that led to the death of Yusef Hawkins (Aug. 23, 1989), being festive was a chore. I guess I had to take solace in the fact that I, as a brother, survived my teenage years for the most part unscathed. Sorry for the digression. Jon B, musically and figuratively, gave reminder that he bred the likes of Justin Timberlake, Robin Thicke and perhaps even Sam Smith as blue-eyed soulsters who got the stamp of authenticity from lovers of R&B. “They Don’t Know” and “Don’t Talk,” were particular favorites. As a sidebar, the next few performers looked to serve notice to the public that Warryn Campbell is looking to step out of the shadows and earn some of the props his talents and accomplishments warrant. Platinum plaques adorn his walls, Grammys rest on his mantle and, with production/writing credits for artists such as Luther Vandross, Heavy D, Yolanda Adams, Snoop Dogg and Kanye West, his résumé is stellar. Now the work begins, with his new label, My Block Records, a division of My Block Inc. JoiStaRR, set to debut on the label, gave an impressive introduction of her abilities to the crowd in Central Park, but—real talk—her performance was dwarfed by the surprise appearance of Erica Campbell. “Help” and “God in Me” provided the proper balance of spiritual and soul music meshing. Forty-five minutes of Dave Hollister is not quite enough, but considering the length of time that we hadn’t seen him, it was excusable. With a new project slated for release Sept. 28, Hollister should be back this way in a major way. Headliner Musiq Soulchild, his steady career 14 years in, with seven studio albums (two platinum, two gold), has earned himself a loyal fan base that will ride with him through his journey, especially when he’s onstage. When people slip and forget the depth of his catalogue, his loyalists are there singing verbatim and giving a stern look to those who aren’t. In retrospect, the three-hour escape was what the doctor ordered.

Before we bounce, here’s a tidbit for those caught up in this “Ice Water Challenge” thing that’s sweeping the nation. Amyotrophic lateral sclerosis, also known as Lou Gehrig’s disease, has touched our community in a major way. For those who may not remember the name Antoine Lundy, you surely know the voice. As the lead vocals behind “Tears,” “Love Is a House” and “Tender Love,” Lundy, professionally known as TCD of the Force MDs, succumbed to Lou Gehrig’s disease in 1998, after having endured the condition for two years.

I’m out. Can’t sign off with the usual, though. In light of what’s poppin’ and the birth date of Marcus Garvey, we gonna ride with “Up, you mighty race! You can accomplish what you will.”