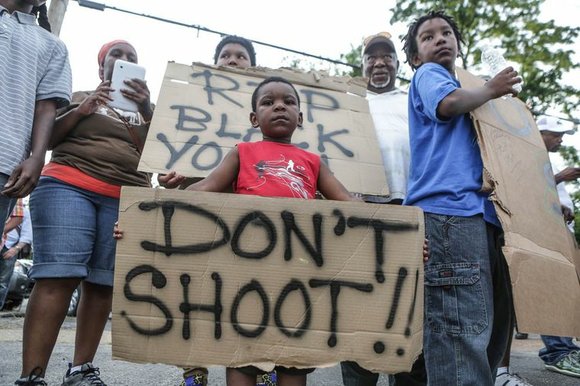 Attorney General Eric Holder arrived Wednesday afternoon in Ferguson, Mo., where he met with the city’s leaders, FBI officials and local law enforcement officers and briefly stated what he’d already written earlier in an op-ed in the St. Louis Post-Dispatch.

“At the core of these demonstrations is a demand for answers about the circumstances of this young man’s death and a broader concern about the state of our criminal justice system,” Holder wrote, after noting the killing of Michael Brown Aug. 9 by police officer Darren Wilson.

He said that while in Ferguson, he will be briefed on the federal civil rights investigation “that I have closely monitored since I launched it more than one week ago. I will meet personally with community leaders, FBI investigators and federal prosecutors from the Justice Department’s Civil Rights Division and the U.S. Attorney’s Office to receive detailed briefings on the status of this case.”

Holder said that he understood the need for an independent investigation, which he hoped will bring some measure of calm to the tensions in Ferguson. Apparently, the very news of his coming had a calming effect Tuesday evening, although more than 45 people were arrested. He promised that the Justice Department would conduct its own autopsy of the 18-year-old victim.

The Brown family hired noted Dr. Michael Baden to conduct an autopsy, which he suspected would be straightforward and consistent with what was disclosed about the six bullets that riddled Brown’s body, including the fatal one to the top of his head. “But there’s no way these autopsies can determine whether he was moving forward or backward,” Dr. Baden told the Amsterdam News in a telephone interview Monday. “So much will depend on the witnesses.”

At the moment, there are conflicting stories from witnesses, as well as reports from supporters of Officer Wilson with an interest in justifying his action, such as the video that was released simultaneously with the identification of the officer that had taken days and possibly motivated the days of protest in Ferguson.

One Facebook commenter, who is a retired police officer, said he would have shot Brown, too. “Police officers have an old saying: ‘I would rather be judged by 12 than carried by six,’” indicating sitting in the courtroom is preferable to lying in a coffin.

But Captain Ron Johnson is demonstrating another feeling about the chaos in his hometown and has thrown himself in the fray and helped to tamp down the anger. Johnson told the press that first and foremost he was a Black man with “a Black son who wears baggy pants, his hat turned cocked to the side, and he has tattoos, but that’s my baby.” Johnson clearly placed Black before blue, a situation that must be closely monitored in the days ahead.

Meanwhile, there remains the presence of heavily armed police who are now backed by the National Guard. Some civil rights veterans said they have not seen anything like this since their days in Alabama and Mississippi in the 1950s and 1960s. Others compare the militarization to South Africa during the uprisings in Soweto and Sharpe ville against the apartheid government.

President Obama took a break from his two-week vacation to return to the White House, but that break was planned long before the turmoil in Ferguson.

The president has said that Attorney General Eric Holder is in charge of the ongoing investigation and the Department of Justice will be conducting its own autopsy. “This independent examination will take place as soon as possible,” said Justice Department spokesperson Brian Fallon. “Even after its complete, Justice Department officials still plan to take the state-performed autopsy into account in the course of their separate investigation.”

As we went to press, it was announced that a grand jury will be impaneled by October, which will give the body time to examine all the available evidence. In the days ahead, there are sure to be more details and controversy surrounding the death of Michael Brown, who has practically pushed Eric Garner from the media spotlight, just as there is sure to be another unarmed Black man “executed” by a white policeman.