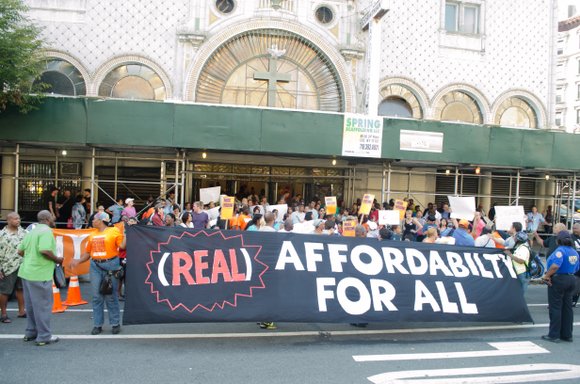 Harlem Week took over 135th Street last weekend. There was food, music, dancing and the a march in celebration of Marcus Garvey's birthday. If you missed it all, don't worry, there is still some more to come. Look out for this today Golden Hoops @ Rucker Park, 5k run and HARLEM WEEK Outdoor Film Festival in Concert with ImageNation.

Oh Harlem Week (which-is-really-a-month-but-hey-who's-counting,) we will miss you. You've brought us such joy and the occasional traffic jam but it's okay. It was you 40th birthday and you partied like a rock star.

The Rent is Too Darn Hi!

”We cannot be one of the wealthiest cities in America and have businesses that pay poverty wages, and people cannot afford to live here,” Rev. Michael Walrond said addressing the enthusiastic crowd at First Corinthian.

With annual median incomes being $32,000 but average rents equaling $2,500 monthly (and rising) locals had no problem letting their frustrations be heard.

Clayton Banks and Bruce Lincoln look on as students present their app projects.

Silicon Harlem in partnership with the Caribbean Cultural Center celebrated the students completing the Apps Youth Leadership Academy. We got a chance to meet with them last week.

In short, the teen participants were amazing and the apps were awesome. We actually can’t wait until the apps are launched. Hey @SiliconHarlem can we be part of the beta group? Pretty please!