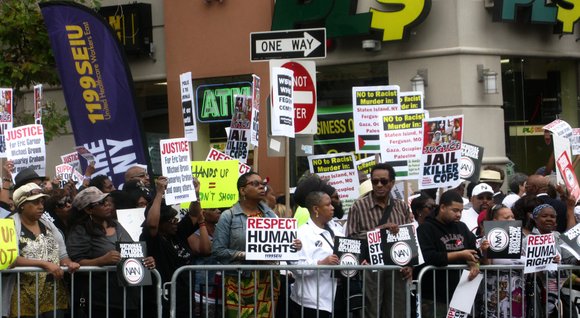 Harlemites traveled to Staten Island called for justice for both Eric Garner’s death as well as the killing of Michael Brown. Emily Goldblum

The streets of St. George, Staten Island closed down on Saturday to make way for thousands of protesters marching in Rev. Al Sharpton’s “We Will Not Go Back” rally demanding justice for Eric Garner. He died in June killed by what investigators believed was a choke-hold during a confrontation with police.

The march began at the scene of Garner’s death across from Tompkinsville Park as an estimated 3,000 - 4,000 marched peacefully to the Court House on Richmond Terrace.

Rev. Sharpton called for justice for both Garner’s death as well as the killing of Michael Brown, which sparked nationwide outrage when police gunned him down in Ferguson, MO.

Harlemites traveled to Staten Island called for justice for both Eric Garner’s death as well as the killing of Michael Brown.

On Saturday, Harlemites along with large groups traveled to Staten Island via caravans and public transportation and the diversity was expansive. Protestors chanted, “No justice, no peace,” “Hand’s up, don’t shoot,” and “I can’t breathe.” Numerous signs depicted the face of Patrick Lynch, the Patrolmen’s Benevolent Association president who declared Eric Garner had resisted arrest. Emerald Garner, daughter of the victim, was there to support her father and Instagram-med her thanks to those who came.

Many current and former Harlem residents took part. “How long do we have to wait for justice here?” said Janay Johnson, a West Harlem transplant who now resides in Staten Island. “We are still waiting and waiting and waiting and it seems like we’re always waiting. Well, we are tired of waiting.”

“If you put your hands around my neck and start squeezing, and I say ‘I can’t breathe’ I have to then start battling for my own air,” Janay continued on the subject.

Frederick Winship, another former Harlem resident, decided to march in honor of a cousin shot by a police officer. He also said he witnessed Eric Garner’s death. “I was right here when it happened,” said Winship who now lives on Staten Island. “I’m glad to see so many people came to the rally.”

Janay Johnson hopes that the energy and excitement of the Staten Island rally will continue. “We will not go back,” she said. “The fight that Martin Luther King and all the people before him fought, against segregation and the racism, disrespect for people of color, the Jim Crow Laws – we are not going to do that again. If this police officer is not arrested and placed in jail this says that it’s okay. How can it ever be okay?”