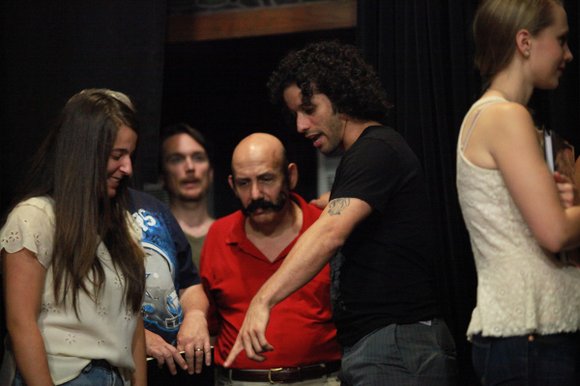 Behind the scenes look of SONG OF SOLOMON with director Luis Salgado.

Actor-director Luis Salgado doesn't slow down. A native of Puerto Rico and resident of Harlem, Salgado is known for his signature mantra—"yes or yes!"— which landed him in the Broadway show, “Rocky,” and helped make his community arts organization R.Evolución Latina (RL) a success.

And another “yes”: Tonight the curtain rises on the play, "Song of Solomon" which Salgado directs. The new musical, created by Andrew Beall and Neil Van Leeuwen, is best described as a tragic romance based on the biblical Song of Songs.

Set in ancient Israel, the musical follows the secret romance between King Solomon and a young vineyard girl, Almah, who inspires the most famous love poetry of all time. The stakes are Solomon's life, the woman he loves, and the fate of Israel.

"This is the type of challenge that I love," says Salgado. "This show is an epic music journey from beginning to end. I am thrilled to be collaborating with such a smart group of creative minds who are very passionate about these piece."

This will be his directing debut for the NYC Thespis Festival Salgado's other directing credits include successful shows in Peru such as "Candela Fuerza y Pasion" and "Aniversario Sin Cuenta." He made his directorial debut in New York City with the family musical "Amigo Duende.

For more information visit www.salgadoproductions.com. For more about Luis Salgado, see this week’s print issue of the Amsterdam News.

SONG OF SOLOMON: Behind the Scenes

Behind the scenes look of SONG OF SOLOMON, a new musical created by Andrew Beall and Neil Van Leeuwen and directed by Broadway's Luis Salgado.