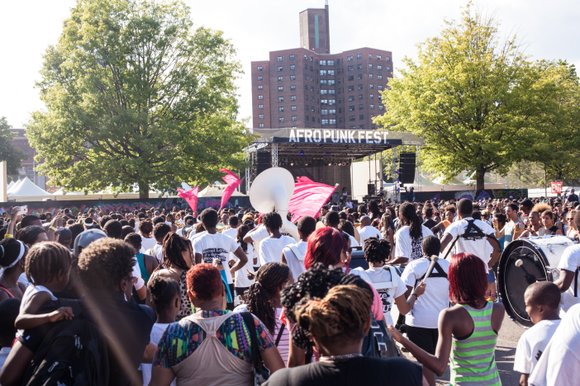 Attendees at the 10th annual AfroPunk Festival at Brooklyn’s Commodore Barry Park waited an hour for headliner D’Angelo to take the stage, but they kept calm. The fact that there was no alcohol served at the event and that the reclusive singer rarely performs likely contributed to the relaxed atmosphere, despite the long wait.

When the bandana-clad R&B crooner finally took to the stage, he dove right into an inspired set that featured little of his own original work. The only song of his that he performed was “Greatdayindamornin’/Booty,” from his second and most recent studio album, “Voodoo,” which was released in 2000. The rest of his song selections were funk, rock and reggae covers.

This was a slight departure from the “neo-soul” sound of his first two albums. There has always been a tinge of funk and rock in D’Angelo’s work, but this performance put that side of his music front and center. He opened with Funkadelic’s “Miss Lucifer’s Love,” a track off the legendary funk band’s album “America Eats Its Young.”

Surely, Ferguson was on D’Angelo’s mind for his second song choice, a rendition of Bob Marley’s “Burnin’ and Lootin.” The song goes, “This morning I woke up in a curfew/O God, I was a prisoner too/Could not recognize the faces standing over me/They were all dressed in uniforms of brutality.”

From there, D’Lo launched into a funk-filled musical journey backed by a live band that included Roots members Questlove on drums and Captain Kirk Douglas on guitar. D’Angelo was on the keyboard, which is where he was when the public was introduced to his music in 1995 via his debut album, “Brown Sugar.”

Other song selections for the AfroPunk set included Funkadelic’s “No Head, No Backstage Pass,” Sly and the Family Stone’s “Thankful and Thoughtful” and the Ohio Players’ “Our Love Has Died.” Fishbone frontman Dr. Madd Vibe joined D’Angelo on stage for a passionate performance of Fishbone’s “Black Flowers.”

D’Angelo closed his funk-filled set with an exciting rendition of Prince’s “She’s Always in My Hair.” He did such an impeccable job of presenting his covers that many AfroPunk attendees thought he was performing new, original work. Older and more enlightened fans sang along to the tracks they knew and loved. Fans who were hoping for anything from D’Angelo’s debut album left disappointed though. He didn’t eek out a single note from that album.

But if the AfroPunk performance is an indication of the direction of his long-awaited third album, D’Angelo might have another masterpiece on his hands.