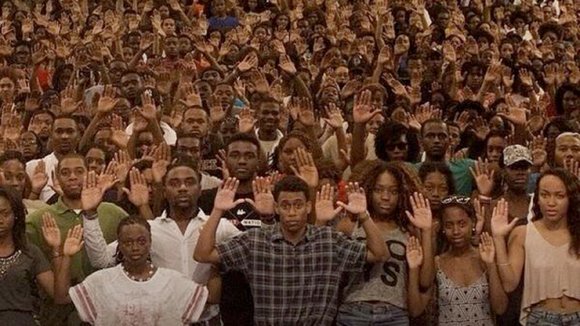 Frustration and the call for justice continues to reverberate across the country, including on college campuses, over the death of unarmed Black teen Michael Brown, who was killed by white police officer Darren Wilson in a St. Louis suburb two weeks ago.

Brown, 18, was shot and killed less than three days before he was to start Vatterot College. His death sparked two weeks of unrest, protests and violent standoffs between police and protesters.

Monday, the day of his funeral, college students nationwide, including St. Louis University and Washington University, reportedly staged walkouts in honor of Brown and as a stand against police violence and racial profiling. Youth activists promoted the event on Twitter with the hashtag #HandsUpWalkOut.

A few days after Brown’s death, a student at Howard University tweeted an image that went viral, which shows more than 300 students showing solidarity with Brown and protesters in Ferguson, Mo. Students stood with their hands raised. At the time of his death, at least three witnesses said Brown assumed the surrender posture to the officer.

Recently, the Harvard Black Law Students Association launched a civil rights campaign, #HandsUpDontShoot, as part of their “Powerfully Utilizing Law School Educations for Political and Social Justice” initiative that seeks to track, report and respond to developing social issues that are affecting America’s Black community. In a statement, the group urged U.S. Attorney General Eric Holder to ensure that the DOJ’s independent investigation is fair and transparent.

“This is not just an issue for Black Americans; it is a civil rights issue that affects all who consider themselves to be free,” said McKenzie Morris, HBLSA president. “This is a moment for policy makers to correct the wrongs that have occurred and continue to occur in police interactions with Black Americans. Our nation must recognize the overt and covert biases that interweave our social fabric. The American promise of liberty and justice can be fulfilled through both policy and social change, but it will not be fulfilled if we stand idly by. HBLSA’s awareness campaign is just one step in the right direction. We, as a nation, still have a long way to go.”

Friday, Aug. 29, the Black Student Union at New York University will host a “Moment of Silence: For Victims of Police Brutality and Racial Profiling” on campus. It is said to be a “time of solidarity, peace and reflection.”

According to the event’s web page, “We will cover our mouths with tape and link together for 15 minutes to signify our connection to the minority community in its entirety and our shared senses of grief, sorrow and concern about the complex issues at hand. This is a moment for us to just be together and think.”