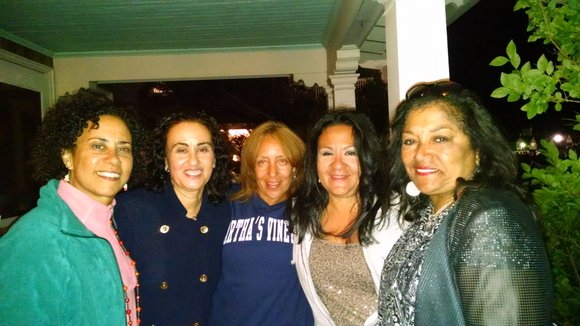 Everyone is here and accounted for on the island of Martha’s Vineyard and having a blast. Unless you encounter some real sourdough people, it is hard, very hard, not to have a good time.

There are so many people here who are ready to give a friendly smile, hello and come on over for a fish fry that even if you do run into a pinhead—that is, a person who is ready to stick a pin in your bubble and burst your dream—you can still enjoy the warmth and camaraderie that permeates the air.

Island fever is everywhere. From South Beach, where the waves are fierce and the sunset mesmerizing, to the porch of Wes and Renee Allen, where everyone gathers, or will at least pass by once or twice, and Nancy’s, where even President Barack Obama stopped by for takeout on one of his trips, the island is enchanting.

Seen eating by the docks were Burt and Michelle Belasco, who are staying with Anne Patrick, daughter of the late Fanny and Mel Patrick. Among those viewing the spectacular fireworks from the Ocean Park home of Stanley and Marcia Nelson were Peggy and Godfrey Moran; Lynn Wareham Howell with her adorable son Nadia Fatah, who just returned in time from leading a tour group through Montenegro and the Greek Isles; Michelle and Nicole Stent; Renee Allen; and Krishna Tarter Tabor, who came “home” from Los Angeles.

Stanley Nelson, who was wearing a Black Panther T-shirt, has established himself as a prominent documentary filmmaker memorializing the Civil Rights Movement in its various forms. This year, the Martha’s Vineyard Film Festival featured “Freedom Summer,” which was directed by Nelson, with a special one-night-only screening. Henry Louis Gates Jr. hosted the screening with a discussion afterwards moderated by Gwen Ifill and featuring a music performance by John Forte. In the audience was Dr. Stanley Nelson Sr., a pioneer of preventive dentistry and who, at 98 years old, is still going strong. Nelson Jr. recalls his dad going on a strictly vegan diet somewhere around the 1980s, and that might have something to do with his longevity—along with his good spirit and warm vibes.

“Ephs on the Vineyard” was a celebratory gathering of the Williams College Black Association Network and Alumni Diversity and Inclusion Society. A warm round of applause has to be given to Asha Rhodes-Meade, Funmi Olosunde and David Edwards, who put together a totally fantastic agenda. Among the highlights of the four-day weekend, which was well-attended, was a screening of the film “Through a Lens Darkly.” Written and produced by Don Parry, class of 1979. The film explores the American family photo album through the eyes of Black photographers, revealing a poignant array of images that have been suppressed, forgotten and lost. The film’s director, Thomas Allen Harris, led a discussion afterwards.

Professor Craig Wilder, the former chair of the Williams Africana Studies Department, now chair of the history department at MIT, gave a talk on his newly released, acclaimed book, “Ebony & Ivy: Race, Slavery, and the Troubled History of America’s Universities.” The book centers on how the founding of well-known universities such as Princeton, William and Mary, Columbia and Dartmouth, to name a few, were conceived and financed on the profits derived from the slave trade.

Chapters of the book also entail the relationship between the Indians and Black slaves and how it was better for a person to say they were Black rather than Indian. If their Indian heritage was acknowledged, they were then subjected to the restrictions, laws and regulations that confined the Indian people. The Indians were forced to live an even more oppressive life than Blacks in general and slaves in particular had to endure.

Other social events included a scrumptious welcoming reception and a farewell dinner held atop the cliffs at Aquinnah, also known as Gay Head. Lit by many stars in the nighttime sky, the music consisted of slow jams that everyone knew and loved, played at a volume conducive to conversation—would Williams alumni have it any other way? There was enough lobster and barbecue chicken, the evening surpassed only by the warm blueberry pie and vanilla ice cream. Did I mention that appetizers consisted of jumbo shrimp, fresh oysters and hot clam chowder—all of which could have been a meal in itself?

Denise and Tracey, staying at the home of Sen. Ed Brooks, hosted the best fish fry ever. In between smacking their lips, guests—including Father Daryl James; Father Ed Slater; the Mays, who, after nine years, are still considered newlyweds; and the Walker sisters, who plan to spend one night on Nantucket—asked Denise if she was going to cook or frame the fish she caught, as it was her very first and she was so proud.

And so goes the lazy, sun-filled days on Martha’s Vineyard, jumping from beach to beach, fish fry to clam bake, soaking up the ocean air and catching up on some well-deserved rest and relaxation. Ahh, until next year.

Until next week … kisses.