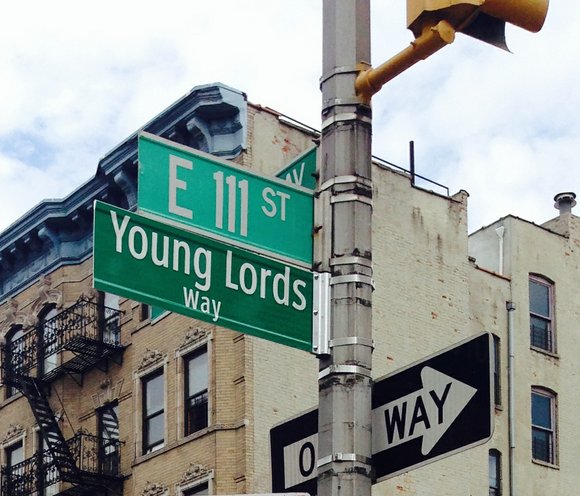 The corner of E. 111th St. and Lexington Ave. was changed Saturday to Young Lords Way, honoring the Puerto Rican group that fought for social justice in the sixties. A huge crowd lined the sidewalk on both sides of the street in front of the First Spanish Methodist Church. In 1969, the group occupied the site for 11 days, creating cultural programs that provided free breakfast, clothing and other services for the community.

“Every street has a story and there are many stories to be told. East Harlem is the cradle of the Puerto Rican community,” said Viverito. “The story we are telling here today is the story of young men and women who took action that forever changed the path of our community.”

The Council’s 8th District representative and Spanish Harlem resident said not only did the Young Lord Party tackle the injustices of the day, but took on a city that deeply neglected the needs of the Puerto Rican community. “The Young Lord Party demanded nothing more than respect and quality of services for Puerto Ricans,” she added. “We are indebted to the young people who sacrificed so much and the activism that the Young Lords demonstrated for the Boricuas.”

The Young Lords began in Chicago in the 1960s as a Puerto Rican gang, but quickly transformed into a leading civil and human rights movement. As members migrated and were recruited across the country, they gained national prominence, leading protests for change in inner cities where Puerto Ricans were being displaced and marginalized.

The influence of the movement extended beyond politics. The Young Lord Party inspired young political leaders, professionals and artists, forming the Nuyorican cultural renaissance in the 1970s, which spread nationally across the United States.

“We were inspired by what was happening in the Black Power and Civil Rights’ Movements. We did not know the impact that this movement was going to have. There were a lot of people waiting for leadership,” said co-founder of the Young Lords Party, Pablo Guzman. “When we took the church, which was an accident, people came from all over the country to be part of our movement.” As “Minister of Information,” Guzman was responsible for spreading the word.

“When we started it was 13 of us and I was it,” said Guzman. “I learned as I went. There were flyers, posters and then a newspaper. What was important was that we reached the people in the community.”

The award-winning journalist said that he was proud to be a part of today’s ceremony and glad to be a witness to some of the progress in America. “I never thought I would see a Black President. That happened. I never thought a Puerto Rican woman would be speaker for the City Council. That happened, but I would never have put money on this,” he added.