Learning the lesson of Ferguson 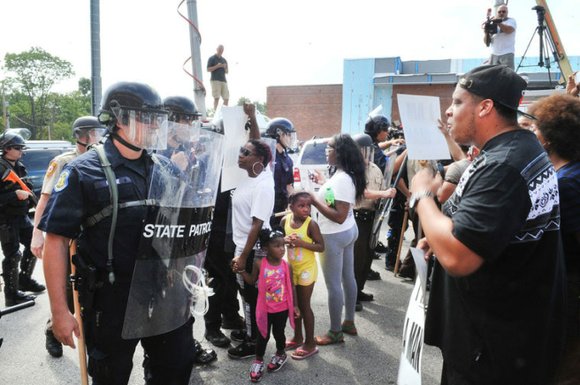 In the best of times, police are part of the community. In the worst of times, the police are at war with the community. What we are seeing in Ferguson, Mo., is more war than policing. CNN captured on video a police officer screaming at protesters, “Bring it, you [expletive] animals, bring it.” This is not, perhaps, the best way to show respect for a community. It is also a dangerous approach to take immediately after a police officer was found to have shot an unarmed young Black man six times, including two head shots.

Unfortunately, this kind of episode is not uncommon throughout American history. From Rodney King to the Haymarket riots, police brutality, curfews and civil unrest accompany communities at war with police. The scenes in Ferguson remind us of several truths and teach us a few new ones.

First, the militarization of the police is alarming and potentially counterproductive. When cops have military weapons, they will use them. For example, in New Haven, Conn., police used SWAT gear to investigate underage drinking. In Louisiana, they used military tactics to do liquor inspections, and in Florida, military-style raids uncovered the devious crime of barbering without a license. Black-clad, RoboCop-style body armor-wearing police with automatic weapons have increasingly proliferated across our society. The message this sends is that the police are at war with the community. Is that what we want as a society?

The opposite of militarized policing is community policing. This is a value system in which police focus on building personal relationships with community members. They use citizen involvement to deal with neighborhood problems and livability issues. This is hard and requires real and deep knowledge of the communities that are being policed. Simple force is the easy and short-term approach, but it is also a value system at odds with respectful harmonious communities. Self-government is not compatible with authoritarian tactics.

Curfews, such as the one enacted in Missouri by Gov. Jay Nixon, only exacerbate community tensions. The First Amendment says that Americans have a right of free association—there is no “after 10 p.m.” exception. That’s why the curfew made people in Ferguson angrier and increased disorder. Americans don’t like being treated like children.

To mitigate the gross imbalance of power between citizens and police, New York should outfit police officers with body-worn cameras. In an age where the technology is available and affordable, it is nonsensical to deprive citizens of the benefits these tools. In addition to providing hard record of an encounter, the presence of a camera can go a long way in encouraging both police and citizens to act with more civility and restraint.

Being a police officer, like all public service jobs, is difficult. It can be dangerous. Police respond to training, culture and the expectations we place on them. If we give them military equipment and teach them that citizens should be docile supplicants who are guilty until proven innocent, they will act like an occupying army. Sometimes police will kill innocent people. If we ask police to be respectful public servants and members of the community, then that’s how they’ll behave.

That’s the lesson of Ferguson, Mo. We should learn from it.

How much surplus military gear, like tactical tank-like vehicles or chemical weapons such as tear gas, is in New York? What is the training regime for use of this equipment? Do communities get a say on whether tanks roll down their streets? We need to find out how much hardware is in New York and how it is being used, then we can formulate appropriate policy to ensure that we prioritize the needs of communities in New York.

If we can answer these questions, then we truly will have learned the lessons from Ferguson and not repeat what happened there.

Bertha Lewis is head of the Black Leadership Action Coalition. Zephyr Teachout is associate professor at Fordham Law School and candidate in the Democratic primary for governor of New York.