Now What? The country waits for developments in Michael Brown, Ferguson case 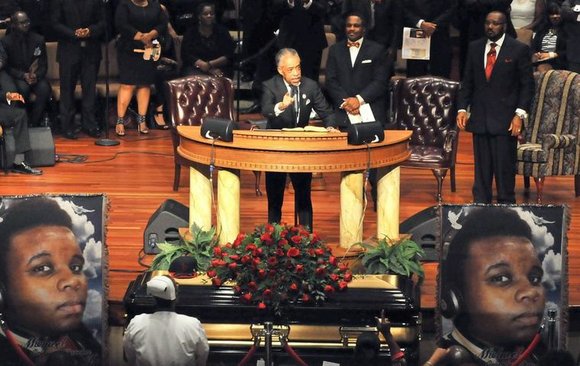 The shots fired by Officer Darren Wilson that cut down Michael Brown in Ferguson, Mo., Aug. 9 are still echoing. The fact that they were caught on audio both clarifies and complicates the scenarios surrounding the unarmed teenager’s death.

On the audio, which was inadvertently recorded by a resident who lives near where the incident occurred, a quick volley of shots is heard, followed by a brief pause, and then several more shots.

Alleged audio recording of shots being fired at Michael Brown

According to a forensic expert who analyzed the audio, at least 10 shots were fired—a cluster of six, followed by four more. Two autopsies, one independently completed for the family, conclude that Brown was shot six times.

That pause is certain to be of critical importance to the case in which a grand jury has already begun weighing the evidence. Attorney Lopa Blumenthal, representing the man who recorded the shots, expressed her concern about the pause. “It’s not just the number of shots,” she told Don Lemon on CNN. “It’s how they were fired. And that has a huge relevance on how this case might finally end up.”

Blumenthal refused to release her client’s identity, but she did explain that the recording was made during a conversation he was having with a friend on a video chat service. A mutual friend of theirs facilitated getting the recording to the lawyer and she, in turn, with his consent, reached out to the FBI.

Much will depend on how the pause in the audio is interpreted. It would seem to support indictment, because the pause, whatever the length, should have given the officer ample time to evaluate the situation after the first round of shots.

The audio will be added to the mounting pile of evidence and the competing narratives from witnesses about what happened on that fateful day.

Meanwhile, Brown was put to rest Monday after stirring remarks from the Rev. Al Sharpton, an account of which appears elsewhere in the paper.