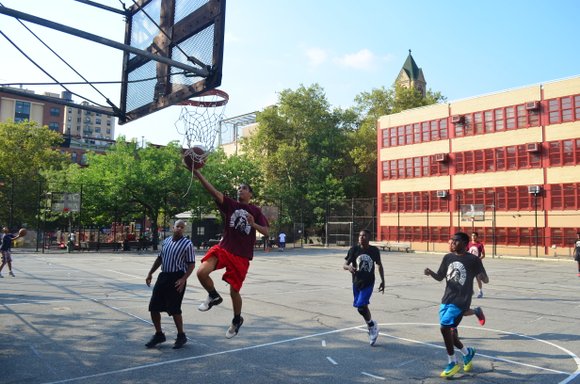 In Harlem, when black kids and the NYPD interact it’s not always under the best circumstances, but earlier this week was different.

NYPD Community Affairs officers in collaboration with local community leaders held the Patrol Borough Manhattan North 1st Unity in the Community, Basketball Tournament, championship game at 104th and Amsterdam Ave. last Tuesday. The tournament hosted 10 teams of middle-schoolers from across the city in a move to foster a better relationship between the teens and local police.

“These young people have to know that, yes there are some issues that may have happened with the police and the community,” said Lieutenant Donzel Clare, who refereed the final match, “but you know what, no one likes to be judged. You can’t judge a book by its cover but by the contents of it’s pages."

Lt. Clare organized this competition in his spare time with the goal of letting the teens know that all NYPD officers aren't bad. When Brian Bereman, the basketball coach at West Prep Academy MS 421 and eventual co-organizer of the tournament, was approached by Lt. Clare to help, he was one hundred percent on board.

“It’s really just about education, fun and interacting with the police,” said Bereman, while standing – and sweating – on the sidelines of the final match. “We wanted to give them structured time to be with each other and bond, and not be in dangerous or difficult situations.”

The teens seemed to have enjoyed themselves even though the match was intense. Harlem Transformers won the match by one point. But even in victory, the young MVP was humble a gracious.

“It's a team game. If I could break it into four pieces and give it to my teammates each piece I really would," said 16 year-old Justin Sykes. “

The losing team, MBCY, did not leave empty handed. Lt Clare had turned their loss into a teachable moment.

“In competition – in life, there are some battles you’re going to win and sometimes there is going to be disappointment,” Lt Clare told the boys. “It’s how you handle the disappointment that’s important.”