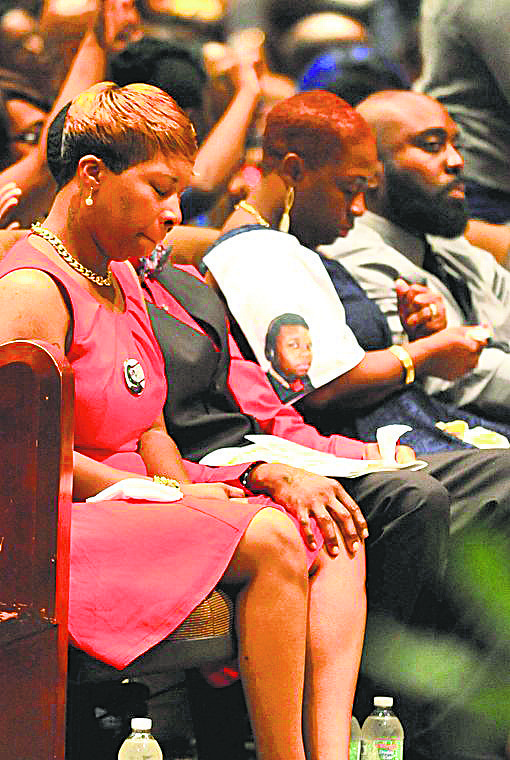 Family, clergy, community leaders and celebrities were among those who attended the two-hour service. The Rev. Jesse Jackson, Tom Joyner, Spike Lee, MC Hammer, Wesley Snipes, T.D. Jakes and Rep. Maxine Waters were among the many notables in attendance. President Barack Obama sent three aides to Ferguson for the funeral, including Broderick Johnson, head of the White House’s “My Brother’s Keeper Task Force.” Family members of Trayvon Martin and Jordan Davis were also at the service.

The Black fraternity Alpha Phi Alpha reportedly paid the cost of the memorial and funeral services.

Lesley McSpadden, Brown’s mother, sat in the front row during the funeral and wept in silence as her son was remembered. At the beginning of the service, she became emotional when she approached the casket at the front of the church before taking her seat.

The Rev. Al Sharpton eulogized Brown and called for changes in how the country handles policing. Sharpton’s appearance at the funeral comes just days after he led a major protest march Saturday, Aug. 23, on Staten Island for Eric Garner, who was also killed by police.

“The policies of this country cannot go unchallenged,” Sharpton said. “We cannot have aggressive policing of low-level crimes and can’t deal with the higher level. Something’s strange that you can get all these guns into the hood, but you go around chasing people with loosie cigarettes and walking in the streets.”

Brown, who was unarmed, was fatally gunned down by Officer Darren Wilson Aug. 9. An independent autopsy revealed that Brown was shot six times, with a fatal shot to the head. The FBI and the Department of Justice are now investigating the shooting.

Before the funeral, Brown’s father, Michael Brown Sr., asked that people not protest so that his family could lay their son to rest. “I would like for no protesting going on,” Brown Sr. said in an interview with a local radio station. “We just want a moment of silence that whole day. Just out of respect for our son.”

Brown was interred at St. Peter’s Cemetery in St. Louis.