We will never forget Yusef Hawkins 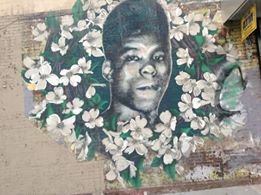 The case has long since entered the annals of New York City history. On the evening of Aug. 23, 1989, 16-year-old Hawkins and three friends ventured into an Italian neighborhood to look at a used Pontiac. They were followed by approximately 30 bat-wielding white youths shouting racial epithets. Then, someone opened fire.

Four shots were fired and Hawkins fell to the ground. He was rushed to Maimonides Hospital and pronounced dead upon arrival. Later, reports would surface that the angry mob was waiting for a group of Black teens who were invited to a birthday party for Gina Feliciano. Feliciano was the ex-girlfriend of a young man who played a part in the killing.

Six days later, thousands of mourners converged at Lawrence H. Woodward Funeral Home in Bedford-Stuyvesant to view Hawkins’ body. In April 1990, the racially charged drama finally switched to the Brooklyn State Supreme Courthouse, where Keith Mondello, 19, was charged with organizing the mob and instigating Hawkins’ murder, and Joseph Fama, 19, who was accused of firing the shots, went on trial for the murder.

“Yusef was aware that racism existed, but he had never experienced it,” Yusef’s father, Moses Stewart, told People magazine in 1990. “He would hear about it on the television, or read about racial incidents, and he would always want to know, ‘Why?’ It kind of gets to me every time I think about it. For him to have lived his 16 years within the Black community, where we have a higher rate of killing one another than anybody else, and then to venture into a neighborhood that one would call middle-class, and then to lose his life—it’s very, very strange when you really sit down and think about it.”

Sources close to the AmNews say that to this day, Hawkins’ mother, Diane, says she has not forgiven her son’s killers. A host of politicians and Black leaders attribute this incident to a change in the political landscape in New York City that paved the way to the election of David Dinkins as New York City’s first Black mayor.

The memory of Yusef Hawkins lives on in movies, music and literature. His murder reminds us of the most prominent episodes of racial violence in the post-Civil Rights Movement era. The recent deaths of Eric Garner on Staten Island and Michael Brown in Ferguson, Mo., as well as that of Trayvon Martin, reopen old wounds created by Hawkins’ murder.