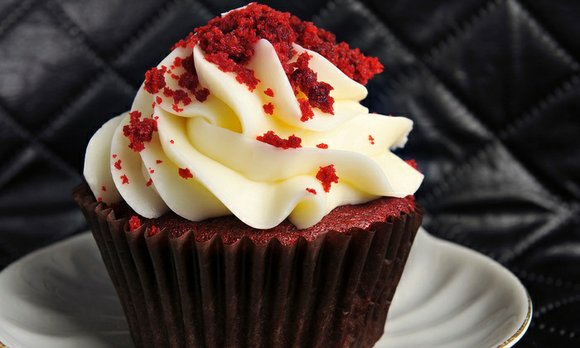 Because red velvet cake is so good, we thought we’d start with this item about a new sweet spot. Our fellow bloggers at Harlem Bespoke offered a heads up that Piece of Velvet, located in Fort Greene, has opened a Harlem outpost at 17 W. 125th Street. The cake shop in Brooklyn replaced the more famous, and infamous, Cake Man Raven, known for mouth-watering red velvet, but less than stellar service.

And also check out Bespoke’s tip on how to avoid the crowds at Red Rooster.

Mayor Bill de Blasio held a press conference at the Lincoln Houses on East 135th Street to announce a plan to fight crime in the city’s public housing developments. 08/29/14

Earlier this week, Mayor Bill de Blasio held a press conference at the Lincoln Houses on East 135th Street to announce a plan to fight crime in the city’s public housing developments. Joined by the ubiquitous Rev. Al Sharpton and City Council Speaker Melissa Mark-Viverito, the mayor said the city has removed about 13,000 feet of scaffolding from housing projects citywide and will remove 30,000 more by next spring. Also expect heightened security measures, such as additional cameras and improved lighting.

If you remember, this wasn’t the mayor’s first visit to the Lincoln Houses: During his campaign last year—urged by Rev. Sharpton—de Blasio and his daughter, Chiara, spent the night with a family to get an idea of what it’s like to live in a NYCHA public housing complex. If you missed the recent press conference, check out Youtube. Skip ahead to 13 minutes and 50 seconds if you have a short attention span and want to see how the mayor handles Harlem hecklers who tried to interrupt his remarks.

The Daily News ran a nice story this week on City Health Works, a community health organization that goes door-to-door to educate East Harlem residents about wellness, fitness and nutrition. The reporter called the group a, “Harlem start-up that makes house calls.” Part of the mission: to cut high rates diet-related diseases like diabetes.

Crain’s New York reports that Bed Bath & Beyond has signed a lease for 30,000 square feet at 5 W. 125th St. The home-goods store will occupy the second floor of the development. The landlords, Aurora Capital Associates and the Adjmi family, are asking for $50 per square foot.