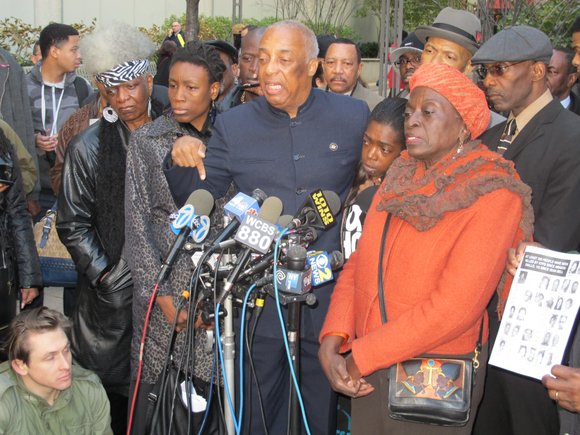 Rosan Miller, the seven-months pregnant woman who was choked by police in July, is also asking Thompson to investigate and prosecute the NYPD officers responsible, and the Barrons are demanding that all charges be dropped against Miller and her family.

The Barrons believe that the case against Liang should be conducted in a preliminary hearing, which would be a public forum, as opposed to a grand jury hearing, which would be private. New York Criminal Procedure Law Article 140 gives a statutory provision for a preliminary hearing when probable cause arises outside a grand jury investigation, especially when probable cause arises from eyewitness testimony plus a medical classification of death as homicide.

”We don’t want any more closed door grand juries, where there is no transparency and the result is always the police officer not getting an indictment,” said Charles Barron. “Let the hearings be public so that we can all see what is really going on.”

In a statement last week, Thompson assured, “I expect to present evidence regarding the November 20, 2014, shooting of Akai Gurley to a grand jury because it is important to get to the bottom of what happened. There is no timetable for the grand jury to be impaneled or for its determination to be reached. I pledge to conduct a full and fair investigation and to give the grand jury all of the information necessary to do its job. That information is still being gathered. As to those who have called for a special prosecutor to handle this case, I respectfully disagree. I was elected by the people of Brooklyn to do this job without fear or favor, and that is exactly what I intend to do.”

The Barrons will be holding a press conference outside Thompson’s office, located at 350 Jay St., between Livingston and Johnson streets, Thursday, Dec. 11 at 4 p.m.