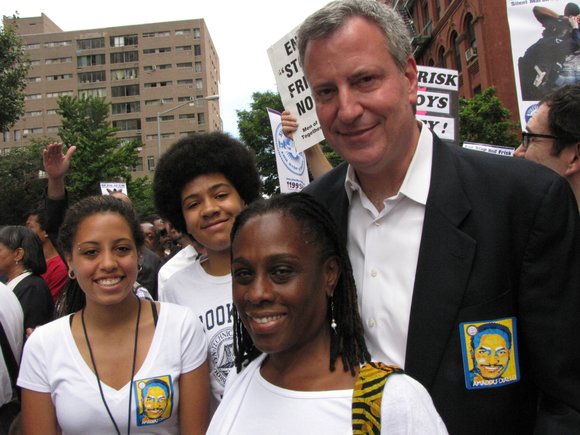 “I make it a point not to talk about any element of judicial process per se,” he replied when asked if he respected the grand jury’s decision not to indict a police officer in the chokehold death of Eric Garner. “I respect the process.”

The mayor may have hedged on this critical question, but he was more than forthcoming when discussing his son, Dante, who fits the description of many of the unarmed Black men killed recently by the police.

After taking Stephanopoulos’s question about the possible risk his son faced from the NYPD, de Blasio said, “Look, I want to say it the right way. What parents have done for decades who have children of color, especially young men of color, is to train them to be very careful when they have an encounter with a police officer.”

“It’s different for a white child,” the mayor continued, “that’s just the reality of this country. With Dante very early on, we said, ‘Look, if a police officer stops you, do everything he tells you to do. Don’t move suddenly; don’t reach for your cellphone.’ Because we knew, sadly, there was a greater chance it might be misinterpreted if he’s a young man of color.” Young Black men, according to a recent study, are 21 times more likely to be a victim of police excessive force and possibly killed than a young white man.

Without saying it explicitly, the mayor was recounting the circumstances that led to the deaths of Anthony Baez in 1994, and Amadou Diallo in 1999, and the more recent tragedy of Eric Garner.

His comments were not received well by Patrick Lynch, head of the Patrolmen’s Benevolent Association, who felt the mayor was throwing the police “under the bus.”

Nor would former Mayor Rudolph Giuliani welcome de Blasio’s remarks about his reaction to the Garner case and the ongoing protests, which Giuliani said should focus on violence within African-American communities.

“I think he fundamentally misunderstands the reality,” the mayor said of Giuliani. “A lot of voices on both ends of the spectrum want to keep us mired in a history that hasn’t worked for us.”

Meanwhile, Police Commissioner Bill Bratton was handling similar questions Sunday on CBS’s “Face the Nation.” He said now that the grand jury has completed its work and found no probable cause to indict police officer Daniel Pantaleo, the NYPD will conduct its own investigation into the incident. “There will be a department trial,” Bratton said. “I will make the final decision.”