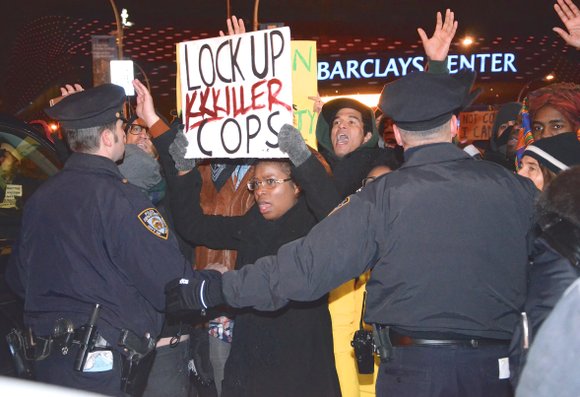 “There was no justice, so there will be disruption,” is the rallying cry of outraged New Yorkers and protestors across the nation and as far as Ireland, Hong Kong and Delhi.

Across the country, everyday people have taken up the cause against repeated fatal police brutality. They have taken to blocking traffic on busy intersections or highways; taken over big-name stores such as Macy’s, Target and Apple; and halted Amtrak and MTA trains—from New York to Philadelphia to Chicago to St. Louis to Berkeley. A movement has risen, birthed by the internationally condemned non-indictment decisions in the fatal police shooting of Michael Brown in Ferguson, Mo., and the chokehold death of Eric Garner on Staten Island.

At a rally in Brooklyn Saturday, community activist Kathleen Daniels declared, “In 2004, New York state repealed the death penalty. Can someone please tell the NYPD? Ten years later, we are still burying Black men—Timothy Stansbury, Sean Bell, Ramarley Graham, Eric Garner and Akai Gurley, killed by police. Calling 911 should not equal calling for an execution. We demand no more executions by the police!”

In the city, community activists, college students and their allies are not the only ones upset over the Staten Island grand jury’s decision to not indict NYPD Officer Daniel Pantaleo in the death of Eric Garner. Local elected officials have expressed outrage as well.

In a statement from the the Council’s Black, Latino and Asian Caucus, the members involved cited a desire to change the aggressive policing done by current NYPD members and how the justice system operates.

“We have made a commitment to change, and that commitment includes our city’s policing and judicial systems,” the statement reads. “There are too many unarmed people of color dying as a result of over aggressive policing. Attorney General Eric Schneiderman told us that we are the only country in the world that utilizes a grand jury system.

“We are seeing, time and time again, that grand jury decisions do not reflect the voices of our local communities,” the statement continues. “The lives of Blacks, Latinos, Asian and many other minorities are devalued and not represented when we don’t hold police officers accountable for negative actions. We came together collectively from all walks of life to say, ‘Black Lives Matter!’”

Barron was at the forefront of the protest. She noted in a statement, that after the “die-in” and the march, most of the council members decided to return to chambers for the scheduled meeting.

“I chose not to,” Barron said. “I am outraged and chose not to return to conduct ‘business as usual.’ My indignation is grounded on the understanding that this is a historical pattern of systemic, racist practices, particularly in the ‘justice’ system; as with the Rodney King beating and the Oscar Grant killing, we are expected to not believe our eyes and to discount the video that shows the actions of police misconduct; the Staten Island DA chose to impanel a grand jury for only one person, when clearly a dozen public safety and medical personnel were present and offered no assistance; the decision to not have a trial to examine the evidence and circumstances of the killing of Eric Garner is unconscionable.