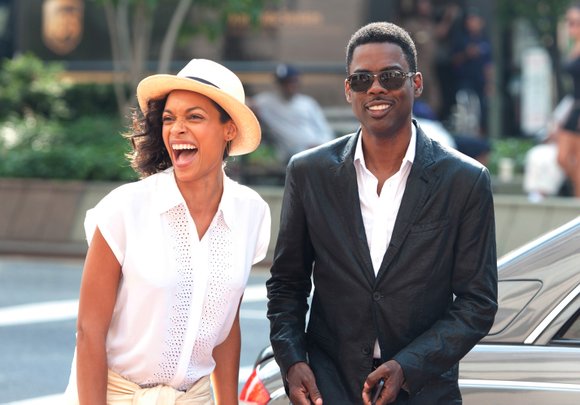 Chris Rock has created a hit with “Top Five,” which wrote, directed and stars in. He has probably added this new film into many future “Top Five Films That We Love” categories—it certainly made my top 10 list for 2014.

The film, like Rock, is impressive, gritty, real “to the bone” and sidesplittingly funny. Creating and maintaining that balance of entertainment and truth has become a signature of the 49-year-old, who continues making a great living at being Chris Rock.

For example, the terrific HBO show “The Chris Rock Show” was followed by many Emmy-winning stand-up specials and his producing and co-creating the critically acclaimed TV series “Everybody Hates Chris.” Well, gosh, it isn’t true. It’s more like “Everybody Loves Chris,” and this film gives us five more reasons to shower him with accolades.

Crafting from the rich material that is his life, in “Top Five,” Rock plays comedian Andre Allen, a former stand-up comedian-turned-mega movie star. This young man is minting money because of his over-the-top character Hammy, essentially Allen in a bear costume chasing criminals while yelling “It’s Hammy time!” After three money-making blockbuster sequels, Andre has grown tired of the lucrative franchise and wants “critical” attention, so he dips his rich toe into the waters of “serious” films, and Rock takes us on a day-in-the-life of a star trying to break out of a mold and emerge as a “serious actor.”

Adding to the 24-hour twist is a pre-wedding frenzy, as Andre is on his way to marrying “Bravo”-like reality star Erica Long (fantastically played by Gabrielle Union), whose entire plastic life is being chronicled with giddy anticipation of the big day. Cameras are everywhere. because nothing says love like a fully paid, product-endorsed celebrity wedding.

On the serious PR grind, Andre’s manager (J.B. Smoove) convinces him to speak to Chelsea Brown (Rosario Dawson), who is in the middle of a New York Times profile piece on him.

Andre, who has been ripped apart by the paper’s movie critic, doesn’t begin their relationship with trust, but as these two attractive, creative souls stroll the streets of the city, they begin to unmask secrets about each other while commenting on life, pop culture, politics and sex.

Trying to show his humble beginnings, Andre brings Chelsea to the housing projects where he grew up. In the modest apartment, she meets a group of Andre’s old friends (played by Sherri Shepherd, Tracy Morgan, Jay Pharoah, Leslie Jones and Michael Che), who take great delight in sharing their strong opinions about the “real movie star.” Rock lets the scene ignite from one comedic gem into another, bringing the best out of his actors while also documenting the environment where Andre’s comedic gifts were born.

As the New York City hours pass, things become more intriguing when Andre and Chelsea discover they are both recovering and struggling alcoholics. Andre’s explanation of when he hit rock bottom—which, we later discover, wasn’t really his lowest point—involves one of the film’s funniest and most shocking set pieces in a Houston hotel room. It’s brilliantly shot, wonderfully imagined and 100 percent disturbing in that classic Chris Rock way.

Now, I come to a close because sharing any more details would spoil this film, and I refuse to spoil this film. It’s that good, and I like you that much. One big hint: “Top Five” transcends its genre. It is a trillion percent better than the trailer, and it’s better than anything Rock has made to date.