Treat your family to see ‘Annie’ 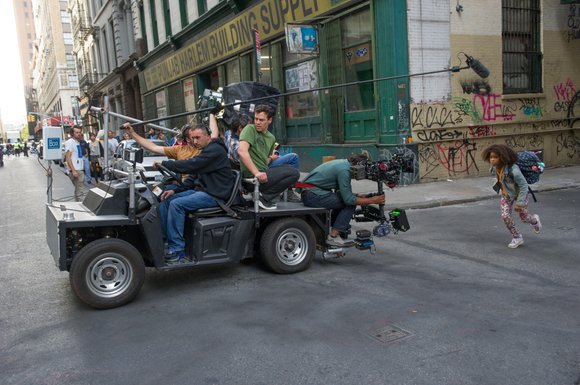 "Annie" shooting in the city Photo by Lapacazo Sandoval

The film is based on the musical stage play “Annie,” book by Thomas Meehan, music by Charles Strouse and lyrics by Martin Charnin. Sure, it’s based on a classic, but the similarities stop there. This is a modern tale, passionately told through the prism of an urban eye, and the music is “goose bumps going up the spine” great. That’s what will make Gluck’s “Annie” it’s own modern classic.

Jazzed up to reflect our times, Wallis stars as Annie, a savvy foster kid who maneuvers the streets of New York with style and purpose. Abandoned by her parents as a baby, with a promise of their return, her young life becomes a series of hard knocks, including living with a mean foster mom, Miss Hannigan (Cameron Diaz). Yet, her life starts to look up when hard-nosed billionaire and New York mayoral candidate Will Stacks (Jamie Foxx) allows her into his opulent life.

Eureka! A way to boost Stacks’ dropping ratings is hatched by Stacks’ comically shrewd and scheming campaign advisor, Guy (Bobby Cannavale), and they take Annie in and change her life, not in small part helped by Stacks’ brilliant VP, Grace (Rose Byrne), who champions the soft change the young girl has on the billionaire.

No stranger to challenges, the big shoes did give the director some trepidation at the start of the process. “Many people that I know have strong memories attached to ‘Annie.’ So we didn’t want to mess up that memory, instead we wanted to create our own,” offered Gluck. “I mean, there are the songs that people love, like ‘Tomorrow,’ ‘Maybe,’ ‘Hard Knock Life,’ so those we kept, but with an updated 2014, pop, really energetic, percussive vibe. The melodies are the same so when kids are singing along, it fits. Plus the other songs, we had fun with the melody and some of the lyrics to make [them] fit into our story and tell a dialogue.”

To achieve that delicate chemistry, the team turned to music producer Matt Sullivan, whose work on film music helped shape “Dreamgirls” into a cinematic triumph. He connected with singer-songwriter Sia and producer Greg Kurstin, and the result is a knockout.

An excellent example is the song “Opportunity,” skillfully written by Sia, Kurstin and Gluck, with Kurstin producing. This is a standout number sung by Annie with a full orchestra behind her at a black-tie event at the Guggenheim Museum. That song came out of the script, and I think it’s got a great shot at getting an Oscar nod for “Best Song.”

“We wanted to create a song that would be happening at an event, where Annie would be singing in front of an orchestra,” said Kurstin. “It is probably the most traditional ‘Annie’ arrangement, because it’s completely orchestral—it’s the only song in the movie that’s like that. She’s singing, and it’s a spontaneous song that comes out of her in front of this orchestra.”

“The City’s Yours,” written by Sia with songwriter-producers Stargate and Benny Blanco, comes as Stacks sings to Annie while flying above Manhattan in a helicopter. Says Foxx, “It lets her know that no matter where you come from, you still got an opportunity to make it. The words are, ‘This is just the start of your story. If you got guts, you got glory. Anyone can make their dreams come true.’ Those are words that we could all live by.”