Inside the NYC press day for ‘Selma’ 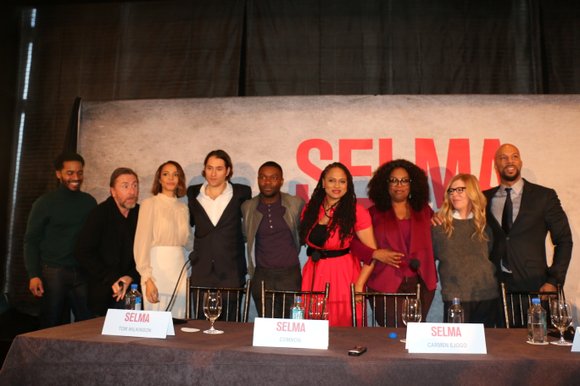 This weekend, we were among a group of media invited to screen Paramount Pictures’ new film, “Selma” (opening Christmas Day), and to participate in the press conference that was held at the Mandarin Oriental.

The assurance that producer and media mogul Oprah Winfrey—who also has a small role in the film, portraying Annie Lee Cooper—would be in attendance sent a tingle down our proverbial and literal spines.

Paramount is also releasing “The Gambler” (Dec. 25) and held the media days for both films at the same hotel.

Art Shrian and I, captivated by our 11:50 a.m. one-on-one with Michael K. Williams, were dangerously late in getting to the 12:30 call time for the “Selma” press conference. “What can I say? It was a love fest interview, and time slipped away.”

When the elevator finally arrived, it does what elevators do when you are in a hurry—it stopped on every floor, except the one you need. The elevator opened again and in spilled an entourage, including a very sharply dressed make up man, MAC lip brush out, who was working and walking backwards into the elevator.

The woman in front of him, her lips half painted in a warm wine color, was the object of his steely concentration.

His brush made quick work of the tall beauty, who seemed at ease with being a muse for an artist’s eye.

I watched the delicate strokes of his brush as he focused on the shape of her lips, dabbing and adding flourishes that only his eye could discern. My fluttering heart begin to calm down because I realized that the “Selma” press conference could not began without the director, Ava DuVernay, who, at that very moment, was the canvas for the make up artist, whose passion made me feel that maybe he was a descendent of the painter Henry Ossawa Tanner.

When the doors finally opened, I turned and, touching the director’s arm, said, “Nice work.”

“Thank you, sis,” replied DuVernay, despite the fact that her lips were still under the artist’s brush. The exchange was brief, but she meant the “thank you” and she poured love into the word “sis.”

Thinking ahead, we tagged our front row chairs with copies of the Amsterdam News. Here are just a few excepts from the front row:

On the subject of divine alignment, actor David Oyelowo was seated on an airplane next to a man who has pondering whether to invest in the indie film, “Middle of Nowhere.” Oyelowo found out that the writer/director was DuVernay and appeared in the film, which won the Best Director Award at Sundance.

During that time, Oyelowo shared his calling to play Dr. Martin Luther King Jr. Years later, sitting in a make up trailer with Oprah Winfrey (“The Butler”), he shared a copy of the aforementioned winning film along with his desire to play King. Winfrey was sold.

After reviewing the film, she sent an email, to DuVernay, sharing the good news that she and DuVernay were going to “become friends.”

On taking the role of the real-life Annie Lee Cooper, Winfrey shared that it was because “Ava made me” and that she used old-fashioned guilt to seal the deal, revealing that the real Annie “watched ‘Oprah,’ every day at 4 p.m., while she ate her tuna fish sandwich.”

Then the mogul turned serious and shed light on her real motivation for taking the role. “For every other woman and man, in my history, who took that walk to the registry’s office and was turned away and then went back home and tried it another year,” she said. “It was Annie Lee Coopers’ fifth time. When you think about what it takes to keep getting up and saying ‘I will and I can’ in the face of an entire society that says that ‘you cannot and you will not,’ I wanted to take a few minutes and honor that walk.”

Up next: more from the director, cast and producers of “Selma.”