An afternoon to ‘Soar’ 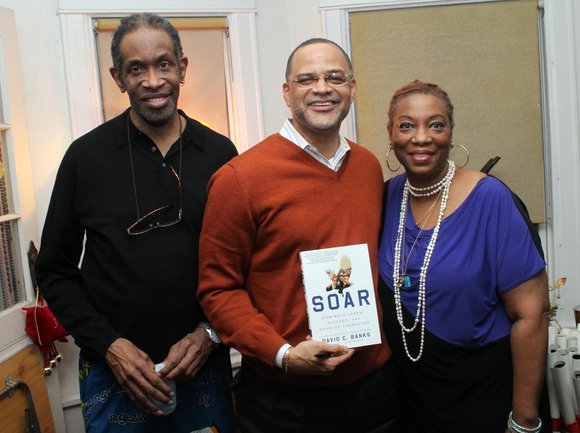 Late Saturday afternoon, more than three dozen friends and neighbors gathered at the home of accomplished artists Rod and Jennifer Ivey anticipating the arrival of David C. Banks, the distinguished leader and founder of Eagle Academy and author of the popular book “Soar: How Boys Learn, Succeed, and Develop Character.”

While guests awaited Banks arrival, they renewed old acquaintances, made new connections, talked about schools, their community work and, of course, the topic on everyone’s heart and mind, Eric Garner.

Arriving about an hour late, Banks explained that he had come from a similar event in Rockland County. His whirlwind book signing tour is motivated by the fact that all proceeds go to benefit the Eagle Academy Foundation, which funds the all-important extracurricular, out-of-school activities that are a part of the work to shape the lives of the Eagle Academy young men.

Rod introduced him, telling the audience about searching for proactive solutions and the importance of rallying family and community.

Banks was no disappointment and was worth the wait. The attentive crowd soon knew they were hearing from a visionary problem solver. He spoke about the founding of the Eagle Academy out of the concern of a small group of his colleagues in the One Hundred Black Men organization. They wanted a solution to the woeful dropout rate among Black boys. At that time, all public schools that at one time catered to an all-male population had disappeared. The graduation rate for Black boys in New York City was a dismal 32 percent—a statistic the men knew predicted a downward trajectory not only in the Black community but also in the city as a whole.

From the one school they started in the Bronx, there are now six Eagle Academy public schools in New York City and Newark, graduating 85 percent of their students, with 100 percent of those going to higher learning institutions.

As the attentive audience took in his words, he read from passages in his book that described how he grew up in Cambria Heights, Queens. The bonds and friendships that he and his brothers shared with the other boys on the block were strong and supportive. The environment kept them out of trouble and assured that each of them eventually landed in college. He spoke of the words of his father, a lieutenant in the NYPD, who always geared them to be strong and successful.

He spoke of what it took from family and community to foster the success of his brother, Police Chief Philip Banks. Philip Banks did not did not always display the traits of future success as he was growing up, but the maintenance of high expectations and the steady support led to his becoming the highest ranking Black official in the current NYPD. David Banks recounts anecdotes like these for the boys in the academy.

“You don’t know the potential,” said the author, giving insight about the principles that are the foundation for the culture of the Eagle Academies.

In “Soar,” David Banks shares the experiences of individual young men from the Eagle Academy and recommends specific approaches that he and his team have used. The book is for everyone interested in seeing our young men succeed—parents, relatives, educators, teachers and employers.