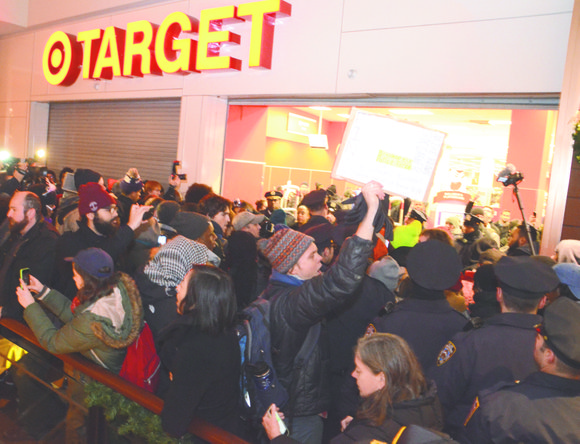 Across the world, people are taking different lessons from the nationwide uprising sparked by #BlackLivesMatter. Protests are capturing front-page headlines, are the topic of talk shows and are the buzz of social media from Peoria to Palestine.

Reuters opinion editor Amana Fontanella-Khan, in a recent piece, wrote, “In some countries, developments in Ferguson and Staten Island have led opinion makers to question the United States and what it stands for … Elsewhere, some use this moment to raise uncomfortable questions about their own imperfect democracies.”

Five opinion pieces from around the world were picked by the Reuters staff to illuminate the diverse reactions to “I Can’t Breathe” and other protests.

“Irony of America’s finger-pointing at China,” read a China Daily headline over recent U.S. criticisms of the Asian giant’s rights record. “The practice of finger-pointing is always tainted with a touch of irony. When you point the index finger at someone, inevitably you have three fingers pointing right back at yourself.

“After examining America’s staggering racial disparity, one cannot help wondering whether the U.S. accusation of the Chinese government this time was another political tactic of shunning criticism at itself. No one would be surprised if the assumption is true.”

The headline in the Hurriyet of Turkey read, “Obama sets examples of police state, not democracy.”

“[The cases of Ferguson and Eric Garner] damage and devalue the U.S.’s democracy and rule of law recommendations to other countries with democratic problems, which is bad for improving democracy and human rights standards around the world,” the article stated.

Turkish President Tayyip Erdogan took it a step further, challenging opposition deputies who criticized police brutality against protesters: “If you dare, try to throw a stone at police in America. You cannot.”

In France, the newspaper Le Monde railed, “Ferguson in Toulouse: when the license to kill and repression are commonplace.”

Last October, 21-year-old environmentalist activist Remi Fraisse was killed by a so-called offensive grenade during a protest near Toulouse. His death sparked protests and riots across the country, as protesters demanded an “end to the license to kill.”

In Israel, the newspaper Haaretz headlined a story, “What the conflicts in Ferguson and Israel have in common.”

“What does this [Ferguson and Staten Island deaths] have to do with Jews and Palestinians?” the paper posed in an op-ed. “Actually, quite a bit.”

“Traveling through Ben-Gurion Airport as a Jew is vastly different from traveling through it as a Palestinian,” the editorial continued, “just as getting stopped by the police can be vastly different, depending on whether you’re white or Black. But very few American Jews, and very few white Americans, have been told, face-to-face, what that alternative experience is like. America’s discourse about race, and the American Jewish community’s discourse about Israel, would be much better if they had.”

Blogger T.O. Molefe wrote in Africaisacountry.com #DeconstructingFerguson and lessons for Black South Africa in Black America, “Racist attacks [are] on the rise, affirmative action is often decried as ‘reverse racism’ and only 53 percent of white South Africans believe apartheid was a crime.