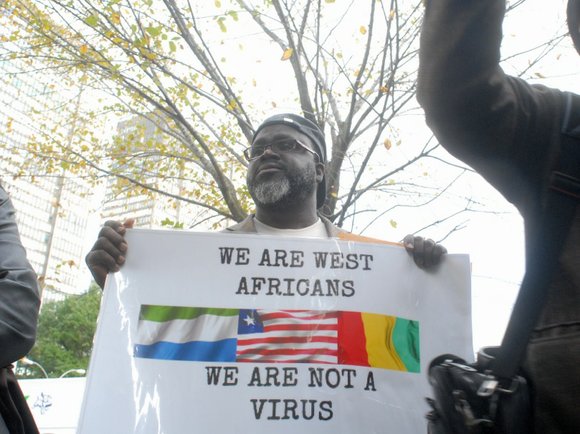 Demonstrators rallied in Manhattan at the United Nations. Photo by Bill Moore

In a report published this month in the journal, Lancet Global Health, UK-based researchers blamed policies of the Washington- based International Monetary Fund that hobbled the development of an effective health-care system in the three affected West African nations. The number of people who have died of Ebola has crossed the 7,500 mark, with more than 19,000 infected.

By reviewing IMF policies from 1990 to 2014, the researchers from Cambridge University, Oxford University and the London School of Hygiene and Tropical Medicine, identified three factors that weakened health-care systems. These factors were the IMF’s requirement for economic reforms, caps on public-sector wages and the decentralization of health-care providers.

Wage caps limit the capacity of these nations to hire and adequately pay key health-care workers, such as doctors and nurses, the researchers said. These caps are linked to the “brain drain” of health workers in countries that need them most.

The IMF push to decentralize health-care systems makes it difficult to mobilize coordinated responses to outbreaks of deadly diseases, such as Ebola, the researchers said.

“All these effects are cumulative, contributing to the lack of preparedness of health systems to cope with infectious disease outbreaks and other emergencies,” Kentikelenis said. “The IMF’s widely proclaimed concern about social issues has had little effect on health systems in low-income countries.”

An IMF spokesman denied the claims, calling them “completely untrue.”

In a letter to the Lancet, an IMF deputy director insisted that health outcomes in Sub-Saharan Africa, including the three Ebola-hit countries “improved significantly” over the past decade or so, including improvements in mortality.

The deputy, Sanjeev Gupta, acknowledged that health-care systems were fragile in the three Ebola-hit countries. “The IMF recognized the urgency of the situation— and moved quickly to help, making available an additional $130 million to the three countries to fight Ebola.”

The money was approved in September of this year. The Ebola outbreak started in Guinea at the end of 2013 and intensified sharply from July, 2014.

The minister cited the underrepresentation of African nations on the IMF board (2 seats for 45 African countries), and an almost insignificant number of Africans in high decision-making bodies and among staff.

“We welcome efforts to address diversity,” she wrote. “However further progress is needed.”