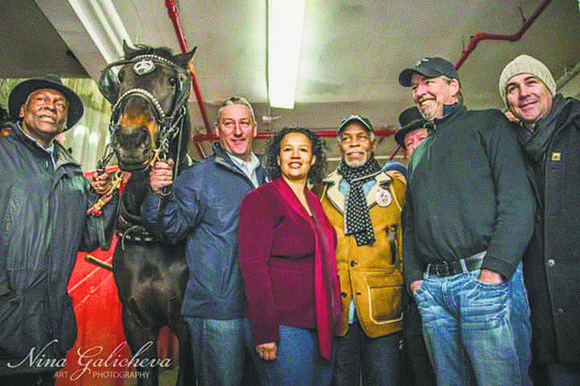 This past month has seen horse carriage workers and their supporters go on the offensive after New York City Mayor Bill de Blasio introduced legislation to eliminate their profession.

In early December, workers and supporters rallied in front of City Hall to protest the mayor’s proposal and for the preservation of their jobs. George Miranda, president of Teamster Joint Council 16, stated that his union stood behind the workers, who are among the 120,000 members of the Teamsters in downstate New York.

“If the City Council takes away their jobs, these workers will lose everything—and they haven’t done anything wrong,” said Miranda in a statement. “We are asking City Council members to oppose this bill, and we intend to win.”

De Blasio’s plan would slowly phase out horse carriages by the year 2016 and won’t renew licenses to operate the carriage horses. Those also expire in 2016. The mayor’s bill would make driving horse-drawn carriages illegal and would require owners to notify City Hall at least 10 days before transferring ownership or disposing of their horses.

One worker is worried about his livelihood if de Blasio gets his wish.

“What am I supposed to do without this job?” said Angel Hernandez in a statement. “How do I pay my bills? Provide for my children? I am proud of the work that I do and hope the City Council doesn’t take this job away from my family.”

Other allies of the carriage drivers include the New York City Central Labor Council, the Laborers’ Union, United Food and Commercial Workers, Transportation Workers Union, United Auto Workers, the Carpenters Union, the Machinists Union, the Insulators Union, the Plumbers Union and the International Union of Painters and Allied Trades, District 9.

“The role of government should not be to create a problem where one doesn’t exist, and then force workers to come up with solutions to save their jobs,” said Alvarez in a statement. “We will stand with the Teamsters for as long as it takes to ensure that these working men are able to continue to maintain these family-sustaining careers, in a historic and iconic industry that our city has come to know and love.”

The carriage drivers also have celebrities on their side as well.

Last week, actor Danny Glover made an appearance at the Clinton Park Stables in Manhattan to show support. While at the stables, Glover referred to the carriage drivers as “hardworking unionized workers.”

“I come from a union household,” Glover told reporters.

“They know that I support workers in every way that I can, and always throughout

my career. They see me whether it’s hotel workers or whether it’s janitors. They always see me supporting workers.”