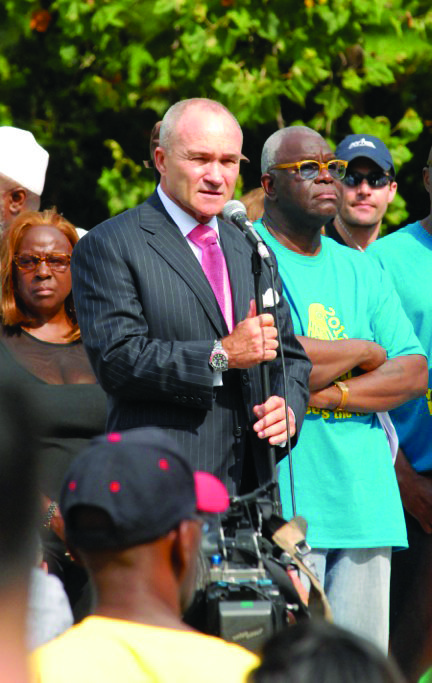 Last Thursday, delivering on a campaign promise that helped him get a landslide victory, Mayor Bill de Blasio announced that his administration will reform the NYPD’s controversial stop-and-frisk policy in response to federal Judge Shira Scheindlin’s decision last August, which ruled that the practice is unconstitutional and discriminates against Blacks and Latinos.

Accompanied by Police Commissioner William J. Bratton and city elected officials at the Brownsville Recreation Center, located in a community significantly affected by stop-and-frisk, de Blasio said, “This has been a long road. We’re here today to turn the page on one of the most divisive problems in our city, and we believe in ending the overuse of stop-and-frisk that has unfairly targeted young African-American and Latino men; and we will be a significant corrective action to fix what was broken.”

As part of the reform plan, de Blasio agreed to Scheindlin’s order to appoint someone to monitor stop-and-frisk for three years, selecting Peter L. Zimroth, a former corporation counsel. He will oversee the reforms that are aimed at ending discrimination, oversee the process in the communities that are mostly affected by stop-and-frisk and provide input on the reforms. The city will also appoint a permanent independent inspector general who will execute external oversight on the Police Department, a method that has being used by the Los Angeles Police Department.

“We will not break the law to enforce the law,” Bratton said in a statement, lauding de Blasio’s effort to appeal the controversial police practice. Bratton said the repeal will result in improving police-community relations. “That’s my solemn promise to every New Yorker, regardless of where they were born, where they live or what they look like. Those values aren’t at odds with keeping New Yorkers safe—they are essential to long-term public safety.

The announcement also came in response to a civil rights case that challenged the constitutionality of the NYPD’s interrogation tactics, the Center for Constitutional Rights’ Floyd v. City of New York. De Blasio said, “The city will resolve the years-long legal battle with plaintiffs.”

The 2nd U.S. Circuit Court of Appeals ruled that the New York City Patrolmen’s Benevolent Association, a union that represents NYPD officers, has until Feb. 7 to file any objections against the reforms, and the city has until Feb. 14 to reply.

In response to the announcement of the reforms, the union’s president, Patrick J. Lynch, said in a press statement, “We continue to have serious concerns about how these remedies will impact our members and the ability to do their jobs. Our goal is to continue to be involved in the process in order to give voice to our members and to make every effort to ensure that their rights are protected.”