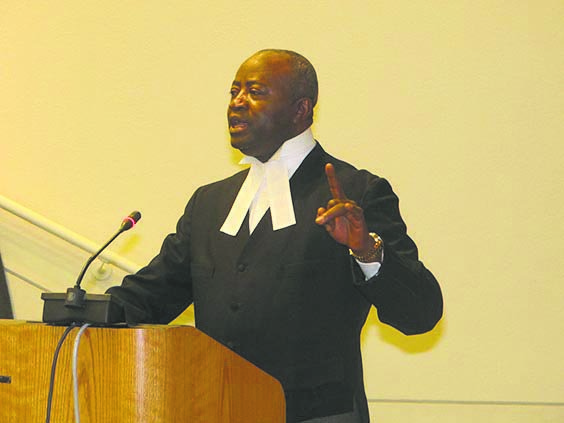 Further evidence of some Western nations’ political, military and economic war crimes and the blatant collaboration of the International Criminal Court (ICC) was exposed at the second International People’s Tribunal (IPT).

Prosecutors of IPT took aim at war crimes and crimes against humanity perpetrated by the United States, Britain, France, Canada and NATO allied countries. They argued about new evidence to the criminal case submitted to the first IPT in January 2012, which was subsequently delivered to the ICC in The Hague, Netherlands, in June 2012. Now, more than a year later, the ICC chief prosecutor has not responded to the communication.

This time, IPT prosecutors also argued about evidence exposing the ICC itself as a collaborator in Western war crimes and crimes against humanity, particularly regarding its unrelenting focus on prosecuting economically progressive African leaders.

The IPT was conducted in Columbia University Law School on Jan. 25 in front of a panel of three judges: Queen’s Counsel Courtenay Griffiths, a prominent London-based attorney who defended former Liberian President Charles Taylor in the high-profile case before the Special Court for Sierra Leone in the Hague; Lennox Hinds, Esq.,  who has argued before the International Criminal Tribunal for Rwanda; and Ashanti Chimurenga, Esq., who has argued before the Inter-American Commission on Human Rights.

Griffiths, initially outfitted in British wig and robes, which he promptly and unceremoniously discarded, opened the proceedings with an extensive statement on Western power and its political-economic interest in Africa’s natural resources. “If you declare yourself to be an empire and you’re the emperor that sits in the White House, when you take upon yourself the right to send your troops anywhere you like on the globe, the last thing you’re going to want is for them to be detained and sent to The Hague for trial. Empires do not operate like that. It is a basic rule of empire building. That is why the U.S. has made unilateral treaties around the globe with many countries, which, on pain of being refused aid, cannot hand over the U.S. citizens to The Hague,” he said.

“One of the essential and fundamental difficulties which has historically faced the idea of international criminal law is the absence of the machinery to enforce its writ. Here within the United States or within any sovereign nation, if you make a law, you’ve got a police force and ultimately an army to enforce it,” Griffiths said. “The ICC has none of that, and that’s one of the biggest flaws. So lacking its own enforcement mechanism, the International Tribunals have relied upon cooperating states to execute its arrest warrants and bring fugitives to justice. The United States and NATO have shown an increasing willingness to fill this void.”

The IPT prosecutors, including attorneys Roger S. Wareham, King Downing, Joan Gibbs, Alfred Toussaint and Sylvester Kouadio, charged the Western states with war crimes and crimes against humanity against Libya, Haiti, Cote d’Ivoire, Zimbabwe and Black people of the United States. Extensive and compelling evidence was heard by the panel of judges.