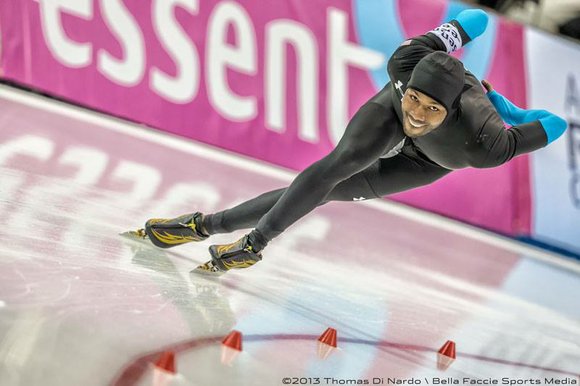 The 2014 Olympic Winter Games opened in Sochi, Russia on Feb. 7 and will run through to Feb 23. The 17-day competition features 15 disciplines of the seven International Olympic Committee-recognized winter sports, according to Team USA.

While Team USA has said the names of those on the Paralympic Team will be made public on Feb. 21, we do know that the 230-member 2014 U.S. Olympic Team, announced on Jan. 27, consists of 106 returning Olympians, including several African-American athletes.

“Traditionally, representing the United States is the epitome and culmination of one’s life’s work. The sacrifices to compete at that level are tremendous. These kids have to overcome a lot of cultural obstacles, playing non traditional sports. We should support them,” said Gary Sailes, associate professor of kinesiology at Indiana University, to the Indianapolis Recorder.

Here is a list of several African-Americans competing in the winter Olympics, according to Indianapolis Recorder and Team USA:

Aja Evans - Bobsled: Evans was previously a sprinter and shot put athlete, her coach at the University of Illinois mentioned bobsled to her while watching the 2010 Olympic Winter Games in Vancouver. She considered the physical attributes required for the sport, and realized she had all of them. She first tried bobsled in October 2012 in Lake Placid, N.Y. She hopes to compete in bobsled at the 2018 Olympic Winter Games, and in athletics at the 2016 Olympic Games in Rio de Janeiro.

Jazmine Fenlator- Bobsled: Fenlator began bobsled in September 2007 at the U.S. Olympic Training Center in Lake Placid, N.Y. Her college athletics coach Robert Pasquarillo sent in an application to the United States Olympic Committee on her behalf. She hopes to win a gold medal at the 2014 Olympic Winter Games in Sochi.

Lolo Jones - Bobsled: She was looking for something different following the 2012 Olympic Games in London. That year, she took up bobsled. She hopes to win a medal in bobsled at the 2014 Olympic Winter Games in Sochi, and in the 100m hurdles at the 2016 Olympic Games in Rio de Janeiro.

Lauryn Williams - Bobsled: Previously a sprinter, she won silver in the 100m at the 2004 Olympic Games in Athens and gold in the 4x100m relay at the 2012 Games in London. She also won gold in the 100m at the 2005 World Championships in Helsinki, Finland. She began competing in bobsled in 2013. She was named the 2004 Athlete of the Year by the Sports Council in the United States. Her goal is to win gold in bobsled at the 2014 Olympic Winter Games in Sochi.

Elana Meyers - Bobsled: She began the sport of bobsled in 2007, making the national team her rookie season. In 2008 she won her first World Cup medal, a bronze with driver Shauna Rohbock. She followed the performance with a gold medal at the inaugural World Cup in Whistler, Canada.At the 2009 World Championships, Meyer pushed with driver Shauna Rohbock to win silver, and won the 2010 Olympic bronze medal with pilot Erin Pac in Whistler. Since the Games, Meyers has moved into the driver's seat, and has been selected by the coaching staff as an emerging elite pilot.