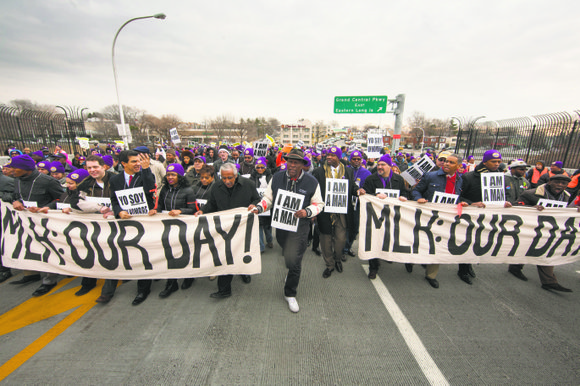 On Monday, airport workers, activists, clergymen and elected officials protested at United Airlines’ offices at Newark Liberty International Airport in support of higher wages. With workers at John F. Kennedy and LaGuardia airports recently celebrating a wage increase, Newark Airport’s service workers refuse to be left out of the conversation.

During a minimum wage roundtable called by Jersey City Mayor Steve Fulop, U.S. Secretary of Labor Thomas Perez and Sen. Cory Booker called for a minimum wage increase to $10.10 to mirror those of workers on the other side of the Hudson River.

“We can help people by raising the minimum wage,” Perez said. “It’s so critically important to raise the minimum wage to $10.10 an hour so people can begin to punch that ticket to the middle class.”

In a statement, Fulop added that New Jersey Gov. Chris Christie should “follow New York’s lead and immediately allow a pay increase for those low-level workers. He should do the right thing and recognize that these people are hard-working people that are struggling and they need to be treated fairly.”

Perez said another simple reason to raise wages is that it helps the economy.

“When you put money in people’s pocket, you know what happens? They spend it. And when people spend money, the economy grows,” he said.

Last week, Port Authority Director Patrick Foye ordered four major airlines to give 8,000 workers making $9 or less an immediate $1-an-hour-raise. In a letter sent to the CEOs of Delta, JetBlue, American and United airlines, Foye told them to grant an increase—with a phase-in to $10.10—and to recognize Martin Luther King Day as paid holiday and work toward “providing an improved wage and benefits package to the thousands of hard-working men and women” at the airports.

Newark Airport workers weren’t a part of that deal.

As the AmNews previously reported, hundreds of contracted area airport workers delivered a signed petition to the Port Authority of New York and New Jersey headquarters on Park Avenue South in December demanding better wages, benefits and paid sick days and holidays. They asked for a gesture from the Port Authority that showed that their suggestions be taken seriously.

Demetrius DeBiase, a 42-year-old baggage handler from Newark for seven years, told the roundtable that he makes minimum wage but doesn’t have health care and paid sick days. He also said that he developed a spinal injury because of the heavy luggage he lifts on the job.

“Each day is a struggle because as you lose those hours and you lose the days. It puts you behind on your bills,” he told the roundtable.